The story is set in a distant future Egypt, after modern civilisation as we known it has collapsed in a cataclysmic nuclear war over oil and other scarce resources. The climate is completely different. It’s cold, even the daytime. Egypt is shrouded in clouds, leftovers of a nuclear winter. The water of the mighty river Nile is tepid and yellowed now. The only safe heaven, in the North, is the aptly named city of Malaaz. A walled-in Medieval city ruled by the warrior class, the so-called Hunters, people who live off of the civilian population – protection money, forced labour in the mines and fields and rock quarries, exploiting the outlying villages.

Everyone in this society knows his or her place. The job of women is to breed, cook and clean. The blacksmiths have their own caste. The foragers looking for scrap metal in the ruins of Cairo have their own caste. Even the ‘outcasts’, leaving beyond civilisation in the hills, have a caste. But things were not always so.

The Hunters, when they first emerged after the collapse, were noble warriors concerned with saving lives and repopulating the villages and cities, before the reign of their leader Rakin. Amorality is the rule of his city. Prostitution is rife, people eat anything with four legs – dog meat is just as welcome as goat meat – and people no longer pray and fast and given thanks to an Almighty God.

Enter the hero, Qasim, a disgruntled youth who – despite his poverty – can read and write. He knows things weren’t always this way and busies himself ignoring people’s feeble lives, through his inventions. He’s an expert mechanic and self-taught metallurgist. His only friend, Uways, is the local blacksmith, and puts up with Qasim’s eccentricities. He’s also the only one who consoles him whenever he gets roughed up for defying the Hunters. Qasim’s grandfather is practically the only Muslim there, praying and reminding Qasim of the importance of faith.

As if things weren’t bad enough, Qasim is going to have to mend bridges with the Hunters as a new threat emerges on the horizon. The arrogant boy prince Seya from the rival city of Abydos, from the South where the old gods of ancient Egypt have been dusted off and reign supreme once again. Seya wants to take the place of the crown prince, heading up North to gather intelligence on Malaaz and conquer it. He enters the city in disguise, befriending the unsuspecting Qasim, and learning the secrets of the science of the world before the catastrophe.

Seya tries to kidnap Qasim, to bring him back to Abydos and make him into his chief weapons scientist (Qasim has invented an electric powered metal detector). Fortunately, Qasim’s grandfather calls on the leader of the outcasts Muhab to find and free Qasim, and in the process Qasim learns that his father was once the leader of the Hunters, and that Rakin murdered him.

Qasim vows vengeance, but only after defeating Seya. The boy prince digs up the military secrets of the past, with the help of a fanatic priest who hates the ‘infidel’ people of Malaaz, and overthrows and slays his own father, building an invincible army with the secrets of the industrial age. (He stole Qasim’s metal detector, dazzling the superstitious southerners with the ‘forbidden’ technologies of the past). Will Qasim have enough time to build an army that can match Seya’s? Will the Hunters play ball in the face of a common enemy? Will the people of Malaaz even notice the difference of one despot taking the place of another?

To find out, you’ll have to read the novel for yourself – and soon. A prequel is already in the works and a sequel isn’t far off! 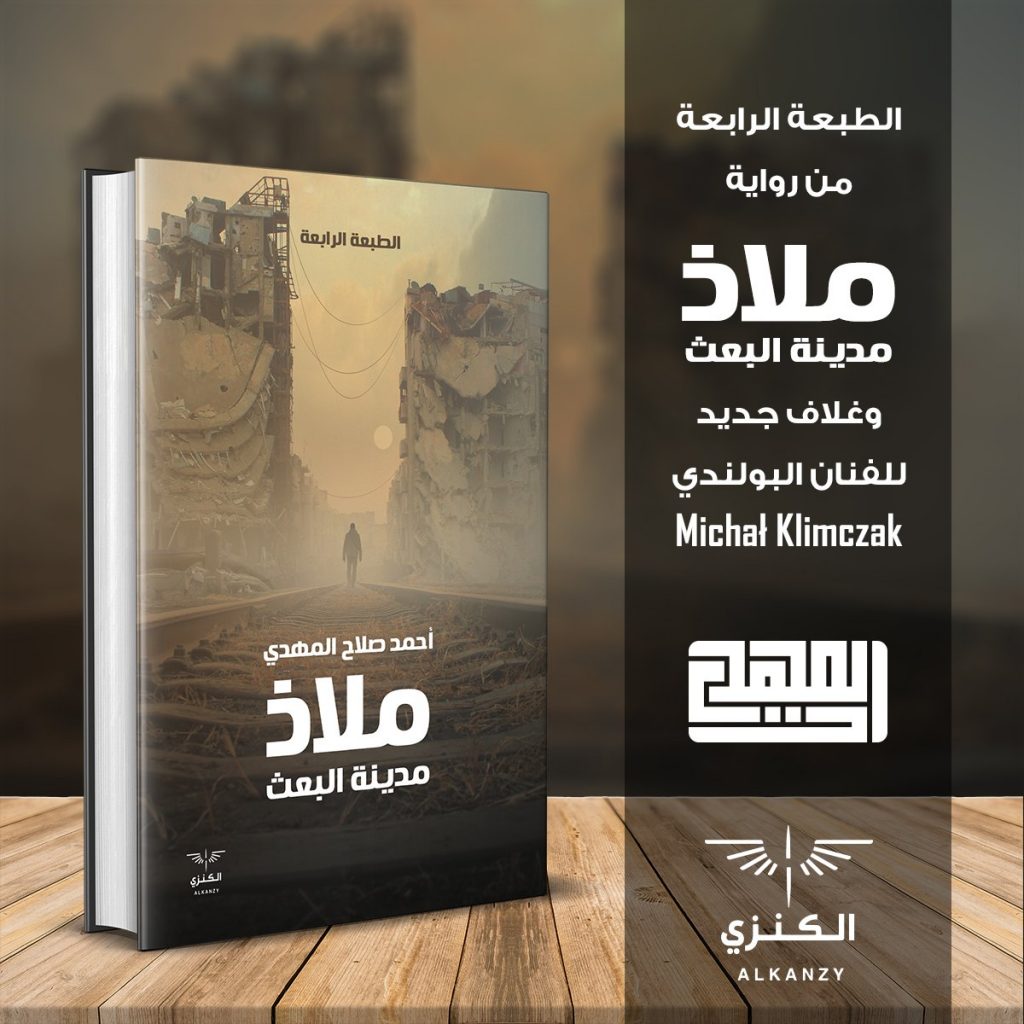 I’ve only recently discovered Ahmed Al-Mahdi’s work but I’m already a fan, and Malaaz is a treat. It’s quite fast paced and doesn’t bog itself down in unnecessary details. This gives it a youthful flavour, especially compared to the usual narrative style prevalent among Arabic authors, with excess linguistic flourishes at the expense of pacing, atmosphere and mood. The opening chapter, “The Lone Wolf”, tells you everything you need to know about the daily life of the Northern city and the kind of inverted ecological system Egypt has found itself in. But it’s not just the geography of Qasim’s world that is mapped out in bits and pieces. It’s the themes and characters as well.

The title of the first chapter is after Qasim’s nickname, since he likes to remain by himself, refusing even to take anyone with him when he goes on his scavenger hunts. On one of those occasions while he’s in the remains of the once great city of Cairo, he’s attacked by a – wouldn’t you know it – wolf.

Fortunately, someone in the vicinity rescue his life, a cute girl by the name of Jihad, with red tattoos on her face. Later you discover she’s the daughter of Muhab, Qasim’s first inclining of the noble blood that runs through his veins. You can guess that Jihad will become his love interest, but more important point here is the moral lesson that ‘no man is an island’ and that you can’t escape your past. It’s only when Qasim joins the Outcasts that he can save Malaaz from the impending threat. Working with the people was a persistent them in Naguib Mahfouz’s harafish epic, and you can guess from early on that the dastardly Hunters are modelled on the Mamluks.

Note also that you have a girl warrior. The citizen of Abydos also worship a goddess of war and the war machine prince Seya forges is also called Rabat Al-Harb (the war machiness). Mr Al-Mahdi is clearly giving proactive roles to women here instead of consigning them to support roles. The names have a religious significance too since the Prophet Muhammad (Peace Be Upon Him) was called Abu Qasim and the hero’s grandfather is called Mahmoud, so Islam still lives in these desperate times. Reviving religion is a must with the revival of the old technologies, since science can be used for good or evil. Qasim uses a nuclear fuel cell to power his machines and has to battle a giant black serpent to find it, a ‘dark’ reminder of the evil ambitions that destroyed the world.

The other thing that impresses itself on you in the novel is the ‘nastiness’. Violent scenes are very gory. (Prince Seya blows somebody’s brains out at one point and slaughters his own family while Qasim learns to be suspicious of everyone, even his allies, at one point).

Ahmed Al-Mahdi is a sweet soul, penning many a childhood epic, but upon querying him he explained that you have to be ruthless following an apocalypse. The war machine Qasim builds is a modelled on a wolf, and the decision to destroy it – to destroy Seya and his mechanical army – can, hopefully, be interpreted as an end to that era. (Seya’s army is made up of robotic spiders and scorpions, and poison is always a symbol of treachery. Rakin killed Qasim’s father with poison too, and betrays Muhab during the great battle at the end of the story).

This novel is worth reading for a whole other reason too – the Arab imprint on such a well-developed sci-fi genre as the post-apocalyptic. If anything, Arabs can make more of an original contribution to the literature than Westerns, if you ask me. Arabs have a richer historical and literary tradition to bring to bear on it.

Western authors invariably rely on the imagery of the Dark Ages. Just watch Kevin Costner’s The Postman or read The Deathlands series. In Al-Mahdi’s hands the post-apocalyptic takes on two distinct cultural groupings – in the North you have a feudalist society on the model of the Mamluks, while in the South they go all the way back to the Pharaohs. Straight away you can see a difference. You can see societies able to cope and get their act together. When Qasim is injured during an altercation with a heavy-handed Hunter, his blacksmith friend advises him to go to the Herbalist to get the wound treated. Medicine was quite advanced in Mamluk Egypt, and as cruel as the Mamluks were, they used their power to keep society functioning. Hence the repeated complaint about how people are forced to toil in the mines and fields for no pay – serfdom or sukhriya in Arabic.

Things are even nicer down south. The streets in Abydos are clean, the architecture is unified (not a mixture of old and new) and you have a large if outdated army, an organised priesthood and centralised political authority. They have access to all their ancient scrolls and so have a rich if jaundiced sense of their own history. (That’s the excuse Seya uses to go to war with the North, the historical claim that all of Egypt was once ruled by the Pharaohs).

You don’t get anything like this in the Western post-apocalyptic tradition. At the most you have a band of bandits in the mountains or a town out of a country Western; witness the cowboy imagery in Book of Eli. Even when you have city states in such works of art, they tend to be surrounded by wooden walls and are completely cut off from the surrounding wilderness, hardly practical if you know anything about history. Not so with Malaaz. It has walls of solid rock, and sentries posted everywhere in the daytime when the gates of the city are opened for merchant produce. And people are told when the gates open and close, to go about their business are quickly and securely as possible.

Ibn Khaldun commended dynasties of the past because they always built their capital city next to a village. How would else they get their daily bread and vegetables and fruits?

Look at the exploitative relationship between Malaaz and the surrounding villages, exemplified in the very first chapter where Qasim rides a metallic riverboat. The proprietor doesn’t say a thing the whole time, only concerned with the pay, with an angry look in his silent eyes. The dwellers besides the Nile continue to keep their distance during the battle preparations of the Outcasts and the Hunters too. The whole division between North and South in the novel makes perfect sense from the perspective of Egyptian history. As Mr Al-Mahdi explains: “… in Mamluk time there was the Hawarah revolution ثورة الهوارة and in the modern time the southern الصعايدة feel they are ignored from the government in Cairo, that’s why after Sadaat السادات was assassinated the people in Asyut considered their governorate an independent country.”[3]

Egyptians are closer to the past than Westerns, and we have a lot more Medieval characteristics to our lives than Europeans do, so we can do a better job writing about these kinds of things. I queried a fellow writer (Ammar Mahmoud Al-Masry)[4] on the surprising appeal of the post-apocalyptic to Egyptian authors, and his simple answer was: “How much more post-apocalyptic can you get than what we are living today!”

[3] The Hawarah were a Bedouin tribe that established a de facto republic in Southern Egypt in the 18th century. (Please see http://en.wataninet.com/culture/drama/sheikh-al-arab-hammam/7954/).

[4] Ammar has got a post-apocalyptic novel that’s just come out, the alien-invasion epic Shadows of Atlantis: https://www.goodreads.com/book/show/36388411.