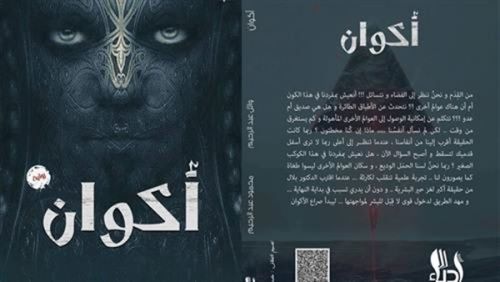 Akwan (2017) or ‘Universes’ is an exceptional novel by Egyptian standards, and for several reasons. One, it’s a science fiction novel and a hard-core sci-fi novel at that, dealing with parallel universes and alternate dimensions. (The Egypt of nowadays, horror and supernatural thrillers count as SF, with science being a secondary concern). Two, it’s written by ‘two’ authors – the brothers Wael and Mahmoud Abdel Al-Raheem. Intellectual collaboration is a rarity in the Arabic world.

Third, it’s really well written. The narrative doesn’t linger on details – there are too many characters and too many separate storylines for that kind of thing. Consequently, the narrative is fast-paced and exciting. But that doesn’t mean it isn’t picturesque. The opening chapter is set in one of those alternate realities, forcing you to see a world where the colours are all the wrong way around – a blue sun and red sky – only to discover afterwards that it’s Earth, just from a different alien perspective. The fact that a duo wrote the novel had its impact on the narrative, since one brother would write a chapter and end it with a dilemma, leaving it for the other brother to get the hero in question out of the impossible fix he’s found himself in.[1]

No wonder the novel is a real page-turner, all 145 pages of it, even though the whole story takes no longer than a day. (It only took the authors four months to write it). I was able to finish the novel in little over a week, reading it on the bus to and from work. And I’m a slow reader!

The story is set in the near future (no dates are given) and revolves around the exploits of an Egyptian scientist – Dr. Bilal – to unlock the secrets of the Bermuda Triangle and the dire attempts of several parallel worlds to either prevent or facilitate this. Dr. Bilal’s father was a sheikh who cured people with the Quran, refusing to accept payment for his good deeds. (This is supposed to be the scientist’s vocation, pursuing knowledge for its own sake). And the sheikh made it an issue to warn his son not to delve into the mysteries of the Bermuda Triangle, or he’d open up the doors of hell on all mankind.

The Bermuda Triangle is a crossover point between all the different dimensions – alien races that all live on Earth, in an alternate reality. (Earth is referred to as Plan-2). The last time an alien race, the people of Shadow, were able to cross the dimensional barrier, a titanic war broke out. The world of Shadow is an evil people hell-bent on conquest, and they have been preparing for the day when they can bridge the dimensional gap all over again. That’s why they send their top military commander, Darik, to insure the humans remain on their path. Up against them are the people of Hourr and the Genies. The people of Hourr send an enforcer named Nourdan, Dark’s legendary foe, and the Genies send their best general, Jamshid.

Even in the human world there are conflicting agendas. Along with Dr. Bilal’s research vessel are two US warships, under the command of an ambitious and corrupt American official named Mr. Mark. The America’s have a stake in this, hoping to reenergise their ailing empire with whatever scientific discoveries they can make here. (He has secret orders to take over the experiment and even eliminate Dr. Bilal if he refuses to cooperate, and there’s a secret electromagnetic weapon on board too). Darik knows his customers and he gets Mr. Mark to continue with the mission despite the personal danger involved. They have to drive the three ships into the experimental zone to carry out the experiment. Later Mr. Mark gets the American fleet to fight each other; Americans killing Americans.

You can see a parallel track between the people of Shadow and the Americans. The emperor of Shadow is call Huwlak, which sounds a lot like Hulagu, the Mongol emperor who destroyed Baghdad. They’re described as a ‘tribal’ people who were united early in their history and made into a very advanced nation that used all its scientific powers for the pursuit of war. They conquered another dimension in the previous war and massacred its population.

The novel has a thriller format to it. You notice this almost from the word go when Nourdan is on vacation then gets called in by his superiors when they detect odd electromagnetic patterns emanating from the Bermuda Triangle. At the close of the story, he gets sent on another mission just when he thinks he’s going to get to go on holiday.

This is quite a common technique used in American novels and movies, with the hero being brought in from some exotic holiday location or in semi-retirement. There’s no harm bringing it into our part of the world. It adds an element of humour and allows you to see the hero as human, instead of the legendary type hero we’ve inherited from fairy-tale literature. The authors, Wael and Mahmoud, are very sneaky in this regard too. Despite all the spy gadgets the aliens use, when the aliens fight in the ‘zero’ domain – where the dimensions meet, just above the Bermuda Triangle – they have to use swords. The whole reason the Hourr bring in the Genies is because they’re the best swordsmen among all the different worlds, and even a small detachment of them led by general Jamshid can hold off the hordes of the Shadow forces.

The Genies are also honourable warriors. When they see the Shadow army withdrawing at the end, they don’t pursue them. The heroic Genies are also Muslims, since the Prophet Muhammad (PBUH) was sent to both mankind and the Genies. Consequently, they respect human freedoms and don’t rely on demonic possession, except in extreme circumstances and with the permission of the humans.

This is very considerate on the part of the authors, bucking the trend in Egypt The country is positively obsessed with such dark, scientifically inexplicable causes and they’re used as an excuse for everything from physical illnesses to marital problems, problems at work, and – last but not least – psychological problems. There are satellites channels that specialise in nothing else and, as said above, so-called sci-fi literature has pushed science out of the picture entirely. (To be honest, I think this is one and only time I’ve seen Genies being described as a scientific phenomenon, commendable enough in itself).

In this novel, however, science is at that centre of the storyline, just in balance with morality. Dr. Bilal’s ego is what almost ruins everything, even after he gets warned by Jamshid. It’s up to his assistant, Amer, to fix things; Jamshid contacts and ‘convinces’ him.

On the topic of science, the authors have clearly done a lot of research too. There are hints about the ‘Philadelphia Experiment’ in the novel, a classified project the US navy is supposed to have carried out in the past in the Bermuda Triangle. The average Arab hasn’t heard of such things, but Wael and Mahmoud dug it up nonetheless. Quite an exceptional duo, don’t you think?

The ending, I should add, is pretty exceptional too. One, it’s a happy ending, another rarity in Egyptian and Arabic literature. (The good guys actually win). Two, it’s also open-ended. (There are some alien races that aren’t named that were gearing for war, and a new mysterious aquatic race emerges in the closing scene). There’s already a sequel in the works and possibly a whole series in store. That’s yet another hallmark of writing in the Western world – Asimov’s Foundation saga and Robot novels – a trick of the trade we have yet to learn over here.

Building a sci-fi world in bits and pieces in successive episodes not only guarantees sales, but allows the author to explore a whole range of moral and scientific dilemmas and construct future scenarios we can either learn to avoid or aspire to attain. All I can say to the due of Wael and Mahmoud is, may the force be with you!!!

[1] I heard this in person from the brothers at a Cultural Salon held in their honour by the Egyptian Society for Science Fiction on 29 September 2017.