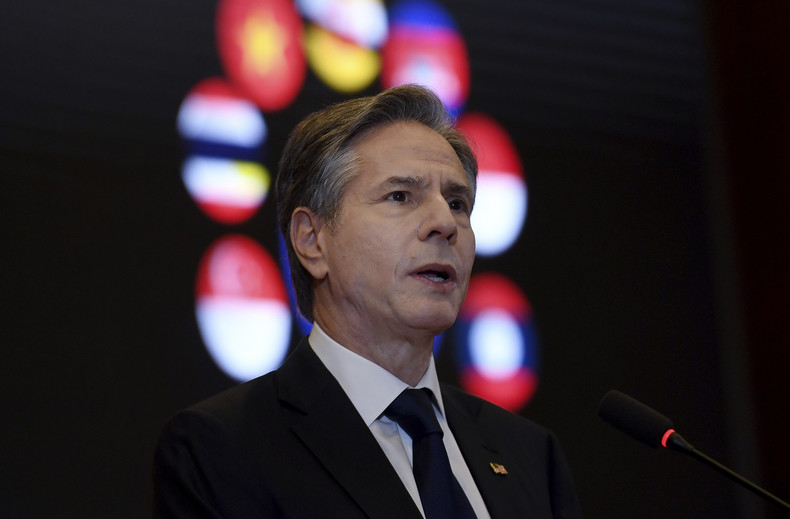 Blinken condemns Putin as he uses WMD excuse in Ukraine

US Secretary of State Antony Blinken cautioned last month that Russia would manufacture a pretext for invading Ukraine. He also warned that Moscow would fabricate allegations about chemical or biological weapons to justify violent attacks against the Ukrainian people.

“The world is watching Russia do exactly what we warned it would,” Linda Thomas-Greenfield, the US ambassador to the UN, told fellow members of the Security Council on Friday.

The emergency meeting was called by the Russian delegation after allegations from Moscow that its troops had uncovered evidence of US-funded biological-weapon programs in Ukraine, including documents it said confirmed the development of “biological weapons components.”

The Russian defense ministry claimed that the US “planned to organize work on pathogens of birds, bats and reptiles in Ukraine in 2022.”

During Friday’s meeting, Russian envoy Vassily Nebenzia repeated accusations by the ministry that Washington is supporting military-related biological research in Ukraine and Georgia with the goal of creating “bio-agents capable of selectively targeting different ethnic populations.”

Thomas-Greenfield said the Russian delegation called the Security Council meeting with the sole aim of legitimizing disinformation and deceiving the world in an attempt to justify “President (Vladimir) Putin’s war of choice against the Ukrainian people.”

She also accused China of spreading disinformation in support of Russia’s claims.

She added that Ukraine owns and operates its own public-health laboratories to detect and diagnose diseases, including COVID-19.

“The United States has assisted Ukraine to do this safely and securely,” Thomas-Greenfield said. “This is work that has been done proudly, clearly and out in the open. This work has everything to do with protecting the health of people. It has absolutely nothing — absolutely nothing — to do with biological weapons.”
Izumi Nakamitsu, the UN’s disarmament chief, told members of the council that no evidence has been found to support the Russian claims of biological-weapons development in Ukraine.

Thomas-Greenfield also accused Russia of long maintaining its own biological-weapons program, in violation of international law, and having a well-documented history of using such weapons.

She highlighted as evidence of this the poisoning of opposition leader Alexei Navalny by Russian operatives, and Moscow’s continued support of President Bashar Assad’s regime in Syria and its efforts to “shield it from accountability when the UN and the (Organization for the Prohibition of Chemical Weapons) have confirmed that Assad has repeatedly used chemical weapons over the past several years.”

The US envoy said her country is deeply concerned that Russia’s call for the Security Council meeting is a “potential false flag effort in action.”

A false flag operation is an action performed with the aim of disguising the true culprit and instead blame another.

“Russia has a track record of falsely accusing other countries of the very violations that Russia itself is perpetrating,” Thomas-Greenfield said. “And (we) have serious concerns that Russia may be planning to use chemical or biological agents against the Ukrainian people.

“The intent behind these lies seems clear and it is deeply troubling. We believe Russia could use chemical or biological agents for assassinations, as part of a staged or false-flag incident, or to support tactical military operations.

“From the beginning, our strategy to counter Russia’s tactics has been to share what we know with the world, transparently — and, candidly, we have been right more often than we’d like.”

She vowed not to allow Russia to “get away with lying to the world or staining the integrity of the Security Council by using this forum as a venue for legitimizing Putin’s violence.”

“Their forces are laying Ukrainian cities under siege,” she added. “Hundreds of thousands of civilians now don’t have access to electricity for heat, or drinking water to stay alive. Russia is the aggressor here.”
She stressed that despite Moscow’s efforts to spread disinformation, it cannot “paint over” newspaper stories or “cover up” the work of the Ukrainian and international journalists on the ground in the country who are reporting the reality of civilian suffering and deaths.

Meanwhile, the Russian media alleged that a pregnant woman pictured being carried on a stretcher while a hospital in Mariupol was evacuated after a Russian attack was an actress.

“Even Russia’s own citizens are tiring of such lies,” said Thomas-Greenfield. “Russian athletes are writing ‘no war’ on their shoes and on TV cameras. Russian citizens are marching in the streets and protesting Putin’s war of choice. And even Russian state-TV pundits — Putin’s own propaganda arm — have called for Putin to stop the military action.”

Thomas-Greenfield again called on the Russian president to end this “unprovoked, unconscionable war against the Ukrainian people.”