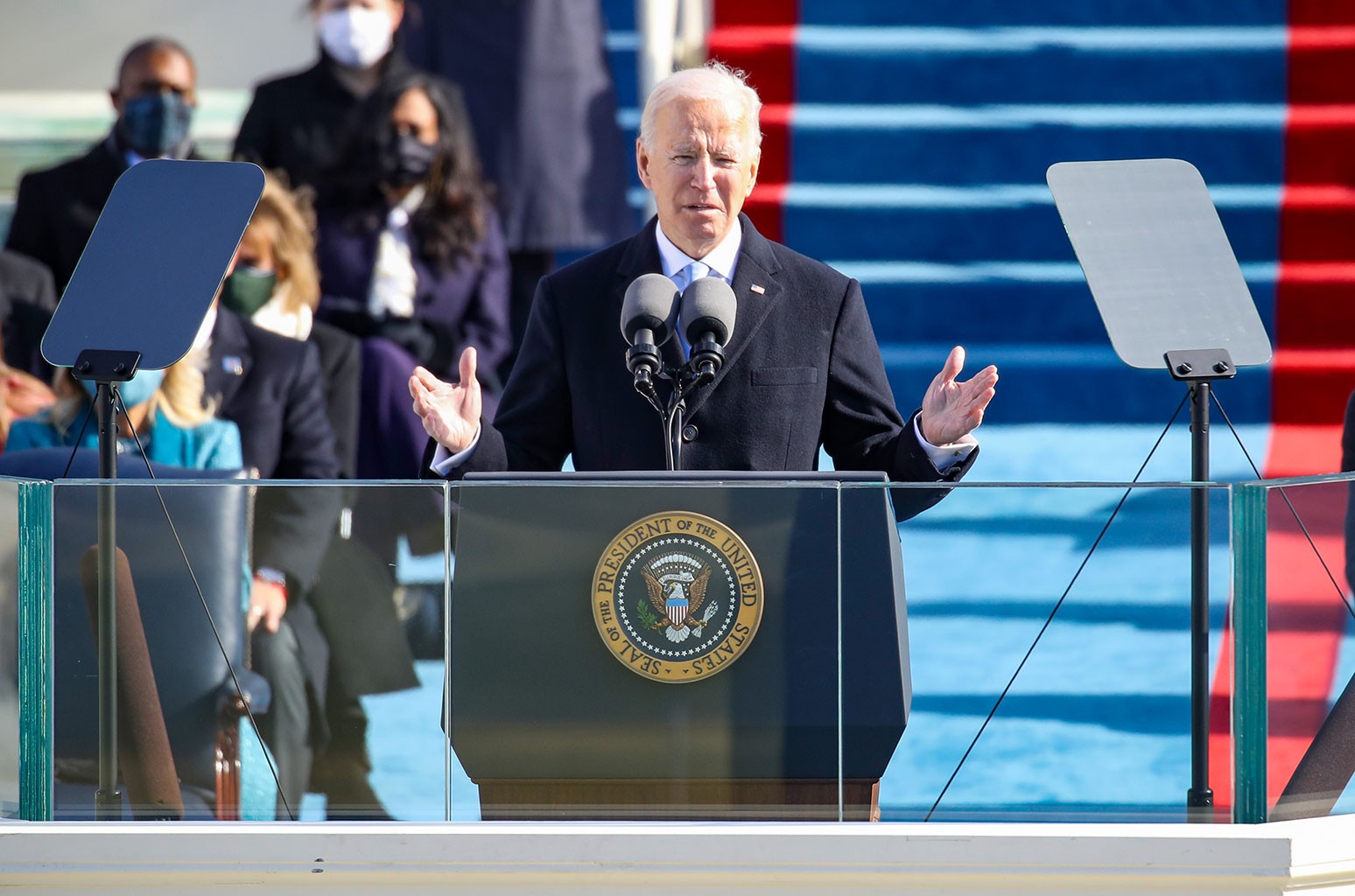 Biden’s speech and the danger of fascism in America

US President Joe Biden delivered a speech on Thursday evening that has no precedent in the history of the country. Cutting through all his evasions and circumlocutions, Biden essentially acknowledged that the United States—supposedly the world’s pillar of democracy—has a mass fascist movement that is on the verge of overthrowing the Constitution and taking power.

“There is no question that the Republican Party today is dominated and intimidated by MAGA [Make America Great Again] Republicans, and that is a threat to this country,” Biden said. “Trump and the MAGA Republicans,” he added, are promoting “an extremism that threatens the very foundation of our Republic.” They “do not respect the Constitution” and do not “recognize the will of the people” or “accept the results of a free election.” They are “working right now… to give power to decide elections in America to partisans and cronies, empowering election deniers to undermine democracy itself.” They see the failure of the January 6 coup “as preparation for the 2022 and 2024 elections.”

Consider for a moment what this means. Donald Trump is not merely a deranged individual acting on his own. The United States is ruled through a capitalist-controlled two-party system. Trump stands at the apex of one of the two state-sanctioned parties, the Republican Party, which already exercises enormous institutional power.

The Republicans control the governorships in 28 out of 50 states and the state legislatures in 30. They hold 50 out of 100 seats in the US Senate and 211 out of 435 seats in the House of Representatives.

At both the state and federal level, Republicans occupy a vast number of judicial seats, including a majority of seats on the federal Courts of Appeals. And, most notoriously, Republicans control the US Supreme Court.

Beyond its immense presence in the judicial and legislative branches of government, the Republicans are deeply entrenched in the military, which is riddled with fascist-minded generals and lower-ranking officers. All the security and police agencies—the Department of Homeland Security (DHS), the Federal Bureau of Investigation (FBI), and Immigration and Customs Enforcement (ICE), to name only the best known—are collectively staffed with hundreds of thousands of fervently pro-Trump Republicans. A similar fascistic infestation is present in virtually every local police precinct in the country.

The Republican Party also controls significant sections of the corporate media, which is an auxiliary institution of the state and its political parties.

The fact that one of the twin pillars of capitalist politics in the United States is led by a fascist, endorsed his rejection of the outcome of the 2020 presidential election, and supported, both covertly and overtly, the violent coup attempt of January 6, 2021 means that a substantial section of the ruling class actively favors the overthrow of the Constitution and a rapid and violent shift to dictatorship.

For Biden—who has for the past 19 months flattered his Republican “friends,” extolled the virtues of “bi-partisanship,” and even proclaimed his support for a “strong” Republican Party—to go on prime time national television to issue his unprecedented public warning testifies to the extent of the fascistic danger. But the president made no attempt to explain how the United States has reached such a point. References to history, economics and even politics were absent from his speech.

Instead, Biden offered nothing but a moralistic appeal that implicitly blames Trump’s voters for the danger of dictatorship. They are motivated, he said, by “fear,” “division” and “darkness,” and have rejected the “light of truth” in favor of the “shadow of lies.” Somehow, “Trump and the MAGA Republicans” emerged out of this “shadow” and will be cast away with Biden’s semi-infantile oratory and, of course, by voting for Democrats in the next election.

Biden could not provide any credible explanation for why 74 million people, including a large percentage of working people, cast their votes for Trump in 2020. Excluding from his speech any reference to economic interests and class divisions, let alone to the corporate-financial domination of the two-party system, Biden made no effort to expose the glaring contradiction between Trump’s crude right-wing “anti-establishment” demagogy and his unswerving defense of ruling class interests.

In America’s entrenched two-party system, sections of workers and the middle class back the Republican Party not out of conviction but by default. To the extent that Trump has a base, it is because the Democrats have nothing to offer and the Republicans are expert at manipulating real grievances and discontent.

Biden’s failure to expose the real economic basis of Trump’s policies was not a matter of forgetfulness. Rather, notwithstanding the conflict between the two parties, they both represent, in the final analysis, the ruling capitalist class and its national and global financial-corporate interests.

The Republicans have been able to build up broader support only because the Democratic Party has rejected all measures that have anything to do with improving the conditions of the working class. It is a party of Wall Street and the military, mobilizing behind it sections of the upper-middle class based on racial and gender politics. Since coming to power, Biden has pursued, in all its essentials, the same policy as the Republicans, including on the pandemic.

Biden and the Democratic Party are nervous about the political and social implications of what the Republicans are doing. They realize that once such extreme actions as overturning the Constitution are taken, they cannot be undone, that the entire system of class rule is being destabilized.

The Democrats, however, are far more fearful of the growth of a social movement from below than they are of dictatorship. Moreover, the Democrats’ central preoccupation in their conflict with Trump has always centered on foreign policy. Notably absent from Biden’s remarks on Thursday was any reference to the expanding US-NATO war against Russia. This is for two reasons. First, they are aware that the war is deeply unpopular. Second, the Democrats are relying on the Republican Party, “dominated” by “extremists,” to help carry out this war.

The Democrats have paved the way for this reactionary dynamic by telling workers they are “deplorable,” denouncing workers as racist, and undermining democratic consciousness by denigrating the American Revolution and Civil War.

In line with their moralistic denunciations of those who led great struggles for social equality, the Democrats have spent the last 50 years getting rid of social programs and slashing taxes for the rich.

The danger of a fascistic dictatorship is ongoing. An extended process is reaching a turning point. The threat of dictatorship is rooted, fundamentally, in 1) the objective crisis of American capitalism and the decline of its global supremacy; 2) the intensification of economic exploitation and, as a consequence, the extreme growth of social inequality; 3) the systematic suppression of social struggles of the working class; and 4) the 30 years of uninterrupted war, which, since Biden came to power, has developed into a direct confrontation with Russia and China. Trillions of dollars in military expenditures to prepare for World War III leave nothing for essential social programs. The escalation toward all-out war requires the escalation toward dictatorship.

The answer to the danger of dictatorship is the development of the class struggle. Only to the extent that the working class breaks out of the restraints that have been imposed upon it can the real class alignments come to the fore. This must be connected to a socialist economic and political program that can appeal to the broad mass of the working class. Only in this way will the forces behind the Trump movement be exposed. To the extent that Trump has a mass base, two-thirds of it, if not three-quarters, is sustained by the hot air of his demagogy. The development of the class struggle will burst his balloon.

The solution to the growth of fascism is not the moralistic pieties of Biden and the Democrats, but the development of a movement that unites the American working class in struggle, on the basis of an international socialist program, against all forms of capitalist exploitation and imperialist war.