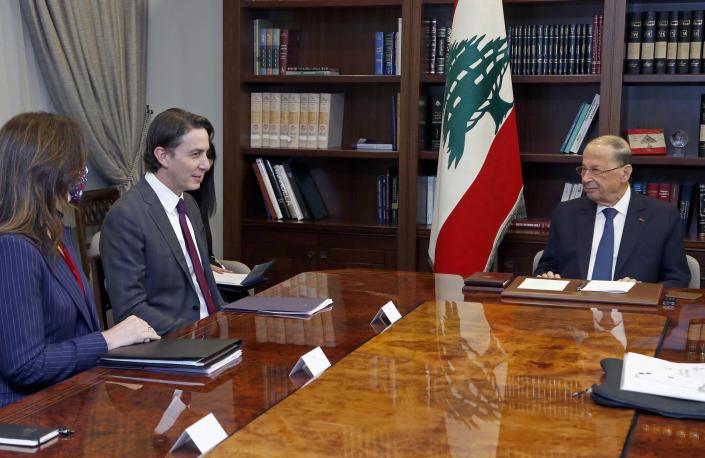 Berri insists that Aoun and Hochstein see eye to eye

Parliament Speaker Nabih Berri announced Tuesday that what U.S. envoy Amos Hochstein heard from President Michel Aoun regarding sea border demarcation is “agreed on by all Lebanese,” adding that Lebanon is “keen on preserving stability.”

Berri voiced his remarks in a 70-minute meeting with Hochstein in Ain el-Tineh.

“The framework agreement remains the best mechanism for indirect negotiations based on its texts, which call for maintaining meetings until reaching the desired results, which in turn would lead to demarcating the border without infringing on Lebanon’s right to drilling,” the Speaker added.

“What’s happening now violates the agreement from one side and also deprives Lebanon of its rights, at a time the Israeli entity is allowed to extract and aggress, which jeopardizes peace in the region and aggravates the situations,” Berri warned.

He also emphasized that while Lebanon is “keen on extracting its resources, it is also keen on preserving stability.”

Aoun on Tuesday presented to Hochstein suggestions related to the disputed maritime border with Israel, the Presidency said.

A Lebanese official who attended the meetings told The Associated Press that they focused on the disputed area of the Mediterranean and that the additional area Lebanon was pushing for -- known in Lebanon as Line 29 -- was shelved.

Lebanese media reported ahead of Tuesday's meetings that Aoun would put forward several proposals, including one which shows readiness to give Israel full control of Karish field in return for Lebanon getting the Qana field, part of which stretches deep into the disputed area.

The anonymous official said Lebanon wants to get full control of the Qana field and has reservations about Israel working in the Karish field without a final agreement with Lebanon.

The Presidency said Aoun gave Hochstein a response to his February proposal to forward it "to the Israeli side." Aoun told the U.S. envoy he hopes that he would return soon to Lebanon with Israel's answers.

Meanwhile, Israeli Prime Minister Naftali Bennet criticized the Lebanese leadership, saying on Tuesday that instead of using gas "for the benefit of its citizens, that same leadership is busy fighting with internal and external disputes."

The dispute over the maritime border is more than a decade old. In 2012, Lebanon rejected an American proposal of getting 550 square kilometers, or almost two thirds of the area, while Israel would have gotten the remaining third.

The offer was known at the time as the "Hoff Line," after U.S. diplomat Frederick Hoff who was mediating then between the two countries.