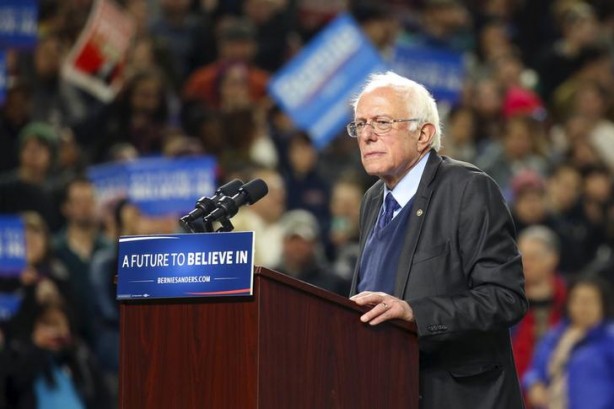 Bernie Sanders has Hillary Clinton right where he wants her

By Robert L. Borosage for Reuters — The patter of establishment calls for Senator Bernie Sanders (I-Vt.) to end his campaign for the Democratic presidential nomination has built into a hailstorm.

“Bye, bye, Bernie,” the Washington Post editorialized prematurely, echoing numerous talking heads. Politico reports Democratic pols are quietly urging him to pack it in. Even President Barack Obama suggested to deep-pocket donors that it’s time to fold in behind former Secretary of State Hillary Clinton. (They already have, Mr. President, they already have).

Some of this is sowed by the Clinton campaign. But most is simple foolishness. It would be inconceivable for Sanders to stop now.

After all, he still has a chance to win the nomination. Sanders just swept through the West, winning five of six contests by stunning margins. In addition, he isn’t just a candidate — he’s a cause. Sanders seeks to build a movement that can make the political revolution needed to transform the country, not simply win the White House. That means a political movement powerful enough to both get big money out of politics and pass Sanders’ agenda. His supporters want and expect him to drive that effort right through the Democratic National Convention and beyond.

Admittedly, the odds against Sanders winning the nomination are long, but they are far better than when the relatively unknown democratic socialist launched his insurgency. Nearly half of all voters have yet to cast a ballot. Sanders continues to introduce himself to more and more of them. He’s already won 15 primaries and caucuses, and lost four more by the barest whisker. And he keeps rising.

For the first time, the most recent Bloomberg poll shows him edging ahead of Clinton among registered Democratic voters. Other national polls consistently show her once forbidding lead continuing to narrow. Sanders draws large and mostly enthusiastic crowds and continues to rouse young people across the country. His supporters are eager to fuel his campaign. He outraised Clinton dramatically in February — $43 million to $30 million, as his 2 million small donors contributed more than her deep-pocket investors. In fact, more than 70 percent of Clinton’s donations have come from large donors, who are maxing out in increasing numbers.

The skeptics groused that Sanders would have to swamp Clinton in caucuses and races out West to be competitive, not simply win by 55 percent to 45 percent. He won 70 percent of the vote or more in Washington, Alaska, Hawaii, Idaho and Utah. Sanders continues to whittle away at Clinton’s lead in pledged delegates.

Meanwhile, Clinton, the prohibitive favorite backed by virtually all the gatekeepers, big donors and skilled campaign operatives, isn’t exactly sealing the deal. More than half of all voters view her unfavorably; only Republican front-runner Donald Trump ranks worse. No one else in a presidential campaign has come close to those negatives since CBS polling began asking the question in 1984.

Americans have doubts about Clinton’s honesty and trustworthiness. Her strength has been experience and electability, but polls show Sanders running consistently better than she does against every potential Republican candidate, largely because he fares far better among independents. Add to this the not insignificant likelihood of drama erupting in Clintonworld — whether from federal investigations, the endless well of stories about the Clinton Foundation, transcripts of her speeches to Wall Street fat cats, her Wall-Mart board meetings or whatever.

Sanders still has a shot. His support is growing, his opponent is increasingly unpopular and his supporters will finance his race. No regular candidate would leave the race in such a position. Ohio Governor John Kasich and Senator Ted Cruz (R-Tex.), the GOP candidates trying to best Trump, would give their left arms to be where Sanders is.

Sanders has no illusions about how hard it is to build a “political revolution.” One presidential campaign, no matter how fervent its followers, can offer little more than a Paul Revere call to action. The actual struggles have only begun.

So, again, why in the world would Sanders shut down his insurgency? He’ll never have this kind of reach to a massive audience again. He’s gaining supporters, triggering organizing and activism, spreading his message and agenda.

That effort has already reaped benefits. He’s proved that presidential candidates do not have to be dependent on big donors. In every race from here on, there will be an insurgent slot waiting to be filled. He’s driven the debate in the campaign, forcing Clinton to adjust her positions and recycle some of his rhetoric. On trade, on Wall Street, on corporate tax dodges and CEO pay, on criminal justice, on the minimum wage and unions, money and politics — his campaign (plus movements like Black Lives Matter and Fight for $15) is opening new ground.

The longer Sanders stays in the race, the harder it will be for Clinton to abandon her new populist pledges.

Even if he doesn’t overtake Clinton’s lead, Sanders can go to the Democratic convention in Philadelphia with virtually as many pledged delegates as she has. He’ll battle over the party platform to push for breaking up the big banks, balanced trade, rebuilding crumbling infrastructure, national healthcare, tuition-free public college and more.

Coming out of the convention, he and his supporters will be able to fight for bold reform, expose corruption and support insurgent movements and candidates. He’s unleashed new energy that won’t die with the election.

The keepers of the failed consensus are aghast, Democratic officialdom nervous. Wall Street donors aflutter. Get used to it. There isn’t a whit of reason for Sanders to shut his campaign down. As the old gospel song puts it, the road ahead is hard. But he’s come too far to turn back now. And he is in no ways tired.

The world reacted to the release on Friday of a U.S. intelligence assessment that Saudi …