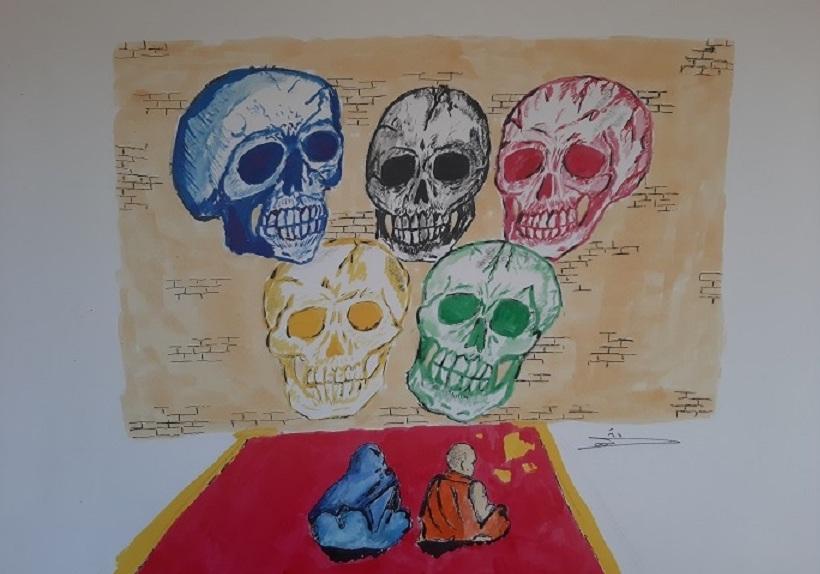 The Berlin Olympic Games in 1936 were a platform the Nazi’s used for their propaganda machine. In 2022 the Winter Games in Beijing offer China a similar podium to cover its wrongdoings. The world is watching a ‘sports-washing opportunity 2.0’ hosted by a totalitarian communist regime that lied to the world about COVID and is committing genocide as we speak.

By Arthur Blok
The International Olympic Committee (IOC) inappropriately gave Beijing, once again, the privilege of hosting the Olympics. Inappropriate is an understatement. By doing so the IOC undermined their own Olympic Philosophy that calls for ‘building a peaceful and better world’.

The Uyghurs, an ethnic and predominantly Muslim minority, are victims of a genocide perpetrated by the Chinese regime for their cultural and ethnic identity. By granting China the right to organize the Winter Games the IOC made themselves complicit in this genocide.

The United Nations says at least a million Muslim Uighurs are believed to have been held against their will by authorities since mid-2017. Human Rights Watch calls China’s treatment of Uighurs in Xinjiang a crime against humanity, while the US Department of State says “genocide” has been committed.

China says the camps are skills training centres and necessary to counter “national extremism”. Didn’t the Nazi’s use similar rhetoric? The first concentration camps in Germany were set up in the late 1930s as detention centres for so-called ‘enemies of the state’.

We all know how that ended.

Who remembers the Summer Games in 2008? When China promised the world to become “a more open and democratic society”. The world is falling for the same trick. Beijing will try, once again, to “create an illusion to the world that all is good” during this year’s Games.

Instead of opening up and respecting human rights, the world witnessed a diminishing of those hopes and expectations from that perspective.

Besides the slave labour treatment of Uighurs in Xinjiang, the deliberate spread - and infection - of the world with COVID-19, advocating unnecessary draconian lockdown measures, not to mention the disproportional violence used against peaceful demonstrators in Hong Kong.

Where is the hypocrite mainstream media in condemning what is happening in China? Why are they so silent? It seems that there are a wide variety of Western sponsors of the Olympics who collectively have decided to press forward with their partnerships as if it is business as usual.

Just like the official Olympic broadcasters like the BBC, NBC, Eurosport, and many more. They all place profit over human lives as well.

Is it not our moral duty to make sure they feel the repercussions of their decisions by not watching these genocidal games?

Finally, should we not make it clear to the IOC that they have condemned Uyghurs, Tibetans, inhabitants of Hong Kong, and many more by refusing to respect basic human dignity?

By doing so they have even put the athletes at risk.

Together with the official sponsors, and broadcasters, they make it impossible to watch this edition of the Olympic Winter Games without engaging in complicity.

Arthur Blok is the Executive editor-in-chief of The Levant News.

One comment on “Beijing 2022 Winter Olympics: a sports-washing opportunity 2.0”