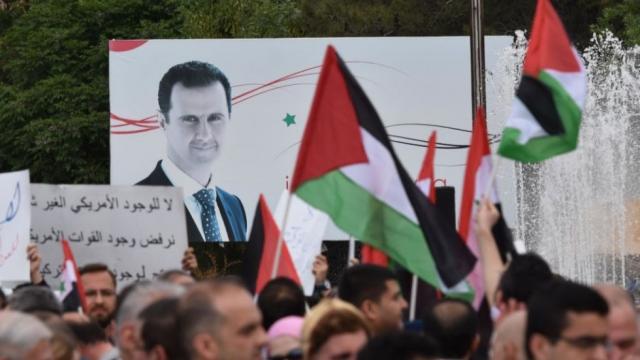 What Is Behind the Leadership Tensions Inside Syria?

Assaad al-Achi | Executive director of Baytna Syria, Syrian civil society activist
Although leadership tensions, at least public ones, are extremely rare in Syria, they have always existed since Hafez al-Assad’s coup in 1970. The most flagrant case of such a leadership challenge was the confrontation between Hafez and his brother Rif‘at in 1984. Hafez was hospitalized due to a heart attack and Rif‘at tried to seize power by having the military brigades he controlled encircle Damascus. The situation was only resolved when their mother intervened and Rif‘at was expelled from Syria, with a very generous sum of money.

This was in the wake of the Hama massacre of 1982 and the Islamist challenge to Assad’s rule throughout the late 1970s and early 1980s. It was reported that Rif‘at regarded his brother’s reaction to this challenge as too soft. More importantly, Rif‘at did not appreciate his brother’s overtures to traditional socioeconomic actors to quell the tensions and move out of the conflict phase.

The current challenge to the regime comes from Rami Makhlouf, Bashar al-Assad’s cousin. Rami has effectively been the family treasurer since 2000. After the uprising began in 2011, he used his Al-Bustan charity to become the main financier of pro-regime militias. He is said to directly or indirectly control upwards of 50 percent of the Syrian economy, a pattern accentuated by the war. However, such hegemony is now challenged by the state, which has imposed huge fines on his main source of income, the mobile operator Syriatel. In a rare appearance, Makhlouf appeared on social media twice publicly asking his cousin to intervene. It seems that his calls remained unanswered. It also seems that Bashar wants to move to a post-conflict phase and dismantle the war economy empire that emerged after 2011 and reach out again to traditional socioeconomic actors. Whether these are his wishes or those of his patrons in Russia remains to be seen.

Sara Kayyali | Syria researcher at Human Rights Watch
Syria is going through an unprecedented economic crisis, and in the face of its inability to fix the situation the leadership has turned on itself. Rami Makhlouf, a key supporter of the Syrian government and the posterchild of the country’s failing economy, has apparently fallen out with Bashar al-Assad, Syria’s authoritarian president. Makhlouf himself publicized these tensions in a series of videos he posted on Facebook this month.

In the latest of a series of actions against Makhlouf, the government demanded that Makhlouf’s Syriatel, a company with a near-monopoly over the telecommunications sector, pay SYP$233 billion ($161 million at the black market rate) that the government claims it owes alongside its smaller competitor. While Makhlouf denies this, the state’s security services have reportedly arbitrarily arrested several Syriatel employees to pressure Makhlouf to pay.

It is difficult to say which side is telling the truth, with both parties known to distort reality. However, the government is using the same abusive tactics of arbitrary arrest, harassment, and misuse of laws to sideline Makhlouf that it did to tens of thousands of Syrians who demanded change since 2011.

As Makhlouf decries the injustice of it all, it is worth remembering that he, by his own admission, was a major sponsor of the abusive and extractive system that has now turned on him. This should serve as a reminder that unchecked, rights abuses can touch anyone.

The tensions inside the inner circle of the Syrian regime reflect three dynamics. The first pertains to the family. Since the Russian military intervention in 2015, followed by the death of Bashar al-Assad’s powerful mother in 2016, the Makhloufs (his mother’s family) have been gradually ousted from positions of authority. The measures against Rami, who once controlled more than 50 percent of Syria’s economy, complete this process—after his brother Hafez and father Mohammed. He is being replaced by businessmen close to Asma, Bashar’s influential wife, in an attempt to enlarge the regime’s clientelistic networks.

The second is related to Russian pressure on Assad. Moscow wants to restructure state institutions, reorganize the army, and centralize the decisionmaking mechanisms under its command, in order to negotiate reconstruction contracts with possible Western and Chinese partners and bring Russian companies and entrepreneurs into a fully controlled theater of operations. To achieve such a situation, Iranian influence within regime circles has to be reduced and Syrian tycoons with monopoles (and Iranian ties) should be sidelined. For Assad, this provides an opening to get rid of his cousin, with his bad reputation, and say he is doing his best to fulfill Russian requirements.

The third can be read through the analysis of the regime’s history and the tensions and defections it faced. After the removal of Rif‘at al-Assad, Bashar’s uncle, in 1984, of Ghazi Kan‘an, the strongman of the security services, in 2005, and of Assef Shawqat, Bashar’s brother in law, in 2012, the Makhloufs are now being targeted. This is not surprising in totalitarian regimes with sectarian, tribal, and familial considerations—often built on the basis of delicate equations.

All this means that the regime will be facing increasing pressure and internal struggles in the coming months. Russia needs official international recognition of its hegemony over Syria and its reconstruction projects. Iran will not agree to be marginalized. And Bashar is mainly concerned with his “reelection” in 2021. Meanwhile, other foreign actors, such as Turkey and the United States, are also reassessing their roles and reshaping relations with their local allies in Syria’s northwest and northeast in preparation for the next phases.

Kheder Khaddour | Nonresident scholar at the Carnegie Middle East Center in Beirut
The recent—and very public—airing of grievances between the prominent Syrian businessman Rami Makhlouf and his cousin President Bashar al-Assad has sparked rampant speculation about tensions among different elements of the Syrian political and economic elite. A great deal of this speculation has focused on the role of Russia and Iran, and the influence of both in Syria, as well as on the competition between them. However, Makhlouf’s dispute appears to be largely an internal matter, one that is more reflective of the changing nature of Syria’s economy than of foreign involvement.

What the Makhlouf affair demonstrates is that the regime is in the midst of rebuilding its networks, which would reflect the development of a post-conflict economy. The war has given rise to a new set of economic elites, many of which rely on their connections to regions outside regime control, or with external powers, for influence. While Makhlouf has been a dominant force in Syrian commercial affairs for nearly two decades, the relative absence of such connections in his case has led to the gradual erosion of his influence to the benefit of newcomers such as Samer Foz, the Qaterji brothers, and Mohammed Hamsho, among others.

Makhlouf’s current struggle is focused on trying to remain relevant in a new phase of Syria’s economy, in which he faces fierce competition. The extent to which he can achieve this remains an open question. While Makhlouf may be able to use the Alawite community to some extent to protect himself, his family connections do have their limits. His ties with Assad through the president’s mother has afforded Makhlouf significant influence, but at the end of the day it is the immediate family of Hafez al-Assad that controls the levers of power.