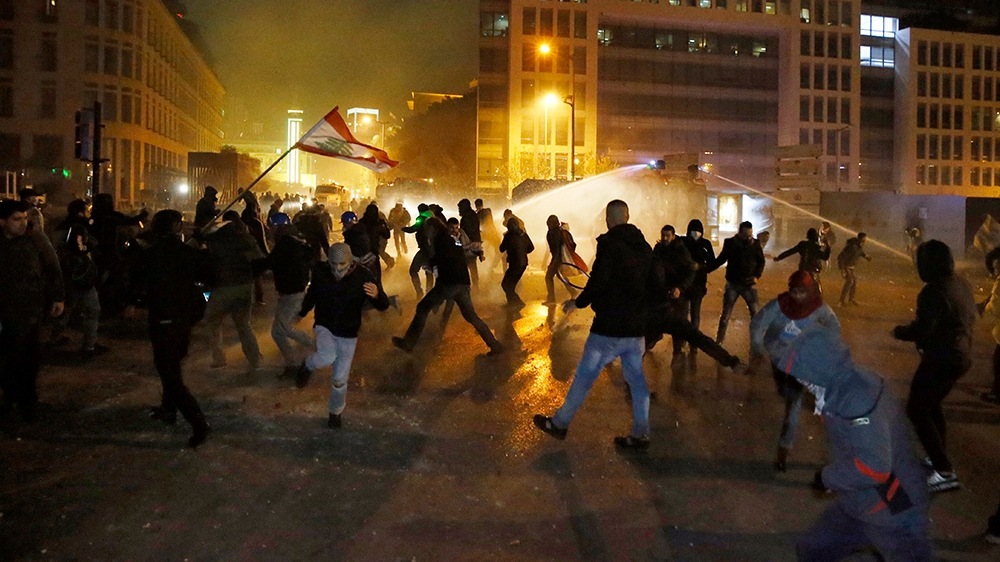 While the infamous “curves” of the coronavirus infected are flattening, one by one the world governments are starting to get ready to move into phase 2 of the Covid-19 crisis. The plan is to progressively relax the lockdowns allowing the return of much needed economical activities, as well as allowing partial social interaction. In Lebanon easing the lockdown means return to massive protests fueled by the nations economic crisis. In recent days the protest turned more violent.

By Alberto de Luca special to The Levant News
Easing the social and economic lockdowns are much awaited steps from the overwhelming majority of the world population. People hope to go back soon to some form of “normal” life and forget the anxiety and troubles brought in by the virus crisis.

As this might look as quite an obvious statement for most of the world, it might not be true for Lebanon and its people. Despite having endured the Covid-19 crisis with very little damage compared to the rest of the world (Lebanon had just 710 cases registered and 24 deceased in connection to the virus to date), the end of the lockdown for this troubled Middle Eastern Country appears far from being a relief for its people.

Popular uprising
The virus crisis has in fact taken place in the middle of a popular uprising that has started on October 17th last year. The Lebanese people loudly asked for a change of its political establishment, which they accused of mismanaging the country for more than 20 years. Prime minister Saad Hariri stepped down, and a new Hezbollah backed technocrat government led by Hassan Diab was born.

The social distancing imposed by the virus, including a night curfew strictly enforced by the new government, had completely stopped the rebellious activities. It even came to a point that some were starting to believe that the revolutionary flame has died at all. It turns out that it is not the case. Pushed by the dramatic worsening of the country economic situation during the last weeks, reflected by the free fall of its national currency, Lebanon seems to stand now on the brink of the abyss.

With as many as five different exchange rates between the Lira and the US Dollar present in the market (of which three of them being “official” i.e. issued by the Central Bank itself), it seems that chaos is the only word to describe the Country current financial situation. In little more than 6 months the Lira has lost almost 65% of its value, resulting in a major loss or purchase power for the overwhelming part of the population.

On these grounds, it should be of little surprise to know that the uprising has started again. Unconcerned by the social distancing still officially enforced, many protesters have taken one more time the roads in the last 48 hours to protest. This time however, the protests have taken a much more aggressive approach.

Besides the return of the road blocks achieved through burning tires, it seems that the banks have now become a main target for the protest. Overnight the facades of several banks were smashed with in the northern city of Tripoli, while a branch of BLOM bank has been completely destroyed by the fire put on by protesters. The concern now is that the rage of the population might mount against the financial institutions, seen as partner of the corrupt ruling elite.

Live ammunition
Protest are turning more violent by the day. The army said a fire-bomb was thrown at one of its vehicles and a hand grenade was hurled at a patrol during rioting in Tripoli, lightly wounding two soldiers. Public and private property had been attacked and banks set on fire, it said. However, various eye witnesses on the ground said to the Levant News that the army was shooting with live ammunition to disperse the protesters wounding many.

Another new development in this new stage of the revolution, is the fact that, according to activists, the main local TV channels seems to have chosen not to provide any fair coverage on the events. Almost ignoring the new uprising in recent days. A sharp difference from the previous, more peaceful phase, when live broadcasting were conducted for long hours into the night by all media. Many see this as a sign that the confrontation between protesters and the “establishment” has reached a completely different level.

No doubts that the bank system is now in the middle of the Lebanese turmoil, with a tough power game being played among the local political leaders aimed at controlling this system. Caught in the middle is Banque du Liban - the Central Bank of Lebanon - which has played a major role in the Country financial roller coaster.

Riad Salameh
Central bank Governor Riad Salameh, who has steered the country through the worst and best of times since 1993, is caught in the eye of the of the storm. The magnitude of the corruption and the various interests at stake can only be understood in light of the most recent rumors about a “file” deposited by Salameh himself at the USA Embassy as a guarantee for his life. He said to appear in a video message this Wednesday to reveal to the public what is inside.

Whatever the case, it seems that Lebanon is heading towards the most difficult period after the end of the civil war.