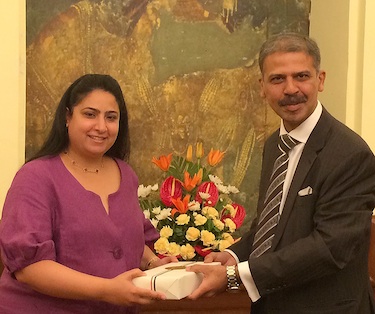 Shaikha Rana Bint Isa Bin Duaij Al Khalifa has made history by becoming the first undersecretary of the Ministry of Foreign Affairs in Bahrain.

She was appointed to the position in a decree issued by King Hamad Bin Isa Al Khalifa on Sunday.

The appointment is seen as a major boost for the status of women in a country where they have been enjoying an impressive array of rights that has allowed them to become ministers, ambassadors and judges.

The support of the Supreme Council for Women, the official entity set up to elevate the status of women and empower them politically, socially and economically, has been crucial in advancing their rights. The council is chaired by Shaikha Sabeeka Bint Ebrahim Al Khalifa, the wife of King Hamad.

Prior to her new position, Shaikha Rana was Assistant Undersecretary for Arab and Afro-Asian Affairs and Organisations at the foreign ministry, a post she held since April 2011 after she was promoted from her position as Acting Director of Information, Research and Studies.

In 2007, she was advisor at the Minister of Foreign Affairs office.

From 1998 until 2007, her career focused on law, academic research and international studies at the University of Bahrain and in the US.