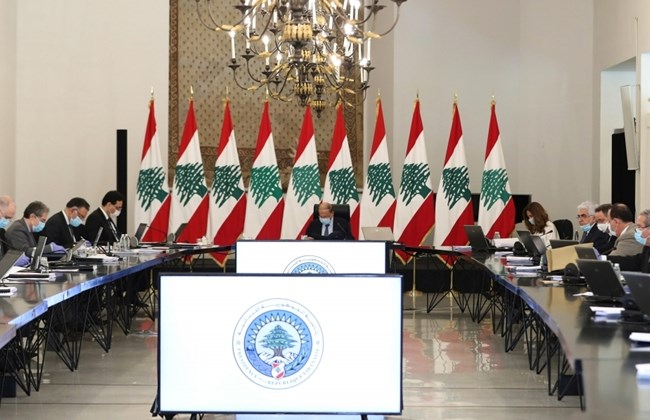 Stable security is essential for political, economic and financial stability, while confronting attempts to incite strife is the collective responsibility of all the country’s political parties, top leaders said in a statement Thursday after attending “national talks” at Baabda Palace boycotted by key opposition figures.

President Michel Aoun chaired a new round of national talks in the absence of nine top Muslim and Christian leaders, whose boycott cast doubts about the outcome of the much-touted meeting initially designed to shield the crisis-stricken country from the threat of sectarian strife following riots earlier this month that jolted Beirut and the northern city of Tripoli. The riots erupted during anti-government demonstrations protesting the deteriorating economic and living conditions in the country.

Attending Leaders
The attending leaders, including Parliament Speaker Nabih Berri and Prime Minister Hassan Diab, accentuated that in “a time of existential crisis, the government and the opposition should team up and work together to rescue the nation from any danger threatening it.”

“The participants discussed the general conditions in the country, particularly the security situation following the developments that happened in Beirut and Tripoli two weeks ago. They agreed that stable security was the basis, and even a condition, for political, economic, social, financial and monetary stability,” said the statement read to reporters by Aoun’s adviser, former Minister Salim Jreissati.

“But confronting strife and sectarian and confessional tensions [designed] to set the stage for chaos is a collective responsibility in which all elements of society and its political components participate,” the statement said, in a clear call on opposition groups to join the government in its attempts to safeguard civil peace in the face of security challenges that have been exacerbated by a crippling economic and financial crisis, the worst in decades.

The participants called for a halt to all “incitement campaigns that are bound to stir up strife, threaten civil peace and undermine internal security and stability that have been achieved by the consciousness of officials and the efforts of the military and security forces which, with their preemptive and field operations, confronted terrorism and its cells and eliminator ideology.”

Ongoing Protests
Referring to street protests over the economic crisis and the dramatic collapse of the Lebanese pound that turned violent and into clashes between protesters and security forces in Beirut and Tripoli earlier this month, the leaders said the right to demonstration and public freedoms is safeguarded in the Constitution.

“But the violent opposition that severs the nation’s links and communications of its people and causes damage to public and private property does not fall in the category of the democratic and peaceful opposition,” the statement said.

The attending leaders said they agreed that the means to deal with the economic, financial and monetary crisis and its social repercussions was through the “adoption of a final path toward structural reforms [in the state finances] and the adoption of the International Monetary Fund program in case we agreed to its reform conditions that will not contradict our interest and our sovereignty, through fighting corruption in a serious manner, and [preserving] the depositors’ rights and our free economic system as contained in the Constitution.”

The leaders also agreed on the “development that should be adopted in our political system so that it can be more viable and productive as part of implementing the Constitution,” the statement said.

Aoun opened the Baabda meeting by warning that Lebanon's civil peace was "a red line". He said that it was the responsibility of everyone to preserve the country's peace, adding that he had hoped the opposition would attend the meeting. Aoun said the recent protests-turned-riots in Tripoli and Beirut were “suspicious” and had “opened the doors to strife.”

“There are those who exploit the anger of the people and their legitimate demands in order to generate violence and chaos, and to achieve suspicious foreign agendas that align with political gains for domestic parties,” he added. Aoun warned that there had been a “return to the language of civil war” and that he felt constitutionally obliged to call for the national meeting to end the “dangerous security lapse.”

Addressing the economic and financial crises, Aoun said that it would not be possible to rescue the country if parties continue to incite people on the street to settle political scores. “If we think that hunger and unemployment have a confessional or political color, we are delusional,” he said.

Speaking at the meeting, Diab doubled down on this message, saying that nobody has “the luxury of time for settling scores and realizing political gains.” “I’m going to speak frankly: The Lebanese do not expect this meeting to yield fruitful results. In their view, this meeting will be like its predecessors and afterward it will be the same, maybe worse,” Diab added.

Economic Collapse
“The Lebanese are interested in only one thing today – how much is the dollar? They want to be protected from exorbitant price rises, to have electricity guaranteed, and for safety and security to be preserved. Everyone here today is keen to contribute to the rescue workshop,” he said.

“We are going through a fateful phase in Lebanon’s history that requires from us combined efforts, giving priority to the country’s interest and reviving the logic of the state,” Diab added.

Dozens of protesters meanwhile gathered on the road toward Baabda under the slogan of “no trust” in the ruling authorities.

The Baabda meeting was marred by a heated argument between former President Michel Sleiman on the one hand, and Deputy Parliament Speaker Elie Ferzli and MP Mohammad Raad, head of Hezbollah’s parliamentary bloc, on the other, over the issue of Hezbollah’s arms, which Sleiman said was responsible for isolating Lebanon from Arab countries.

Sleiman told reporters after the meeting that he objected to the statement issued by the participants. He stressed that there can be no solution to the economic and security problems except by returning to the “Baabda Declaration,” which basically called for distancing Lebanon from regional conflicts, particularly the war in Syria. Hezbollah has been accused of violating the declaration with its involvement in the Syrian war and other regional conflicts.

Of the 20 leaders invited by Aoun for the meeting, only 11 attended, including heads of the Free Patriotic Movement and Hezbollah blocs and their allies. Except for Progressive Socialist Party leader Walid Joumblatt, who was represented by his son, MP Teymour Joumblatt, opposition groups boycotted the Baabda meeting on the grounds that they did not want to grant a political leverage to Aoun’s mandate.

The boycotting leaders, including former premiers Saad Hariri, Najib Mikati, Fouad Siniora and Tammam Salam, have branded the meeting a “waste of time.” Lebanese Forces leader Samir Geagea, a harsh critic of Aoun’s presidency, said the only solution to Lebanon’s multiple crises was the departure of the entire ruling class, including the president, “leaving the opportunity for others to save the country. Otherwise the country will go from bad to worse.”

The planned Baabda talks come as Lebanon is facing an economic collapse and has seen its national currency lose 75 percent of its value on the parallel market, dramatically reducing the purchasing power of most Lebanese, and has sunk more than half the population under the poverty line. The Lebanese pound hit another all-time low against the dollar Thursday, trading at LL6,900, the worst devaluation in Lebanon’s history.

One comment on “Baabda Conference: crisis in Lebanon more dangerous than war”