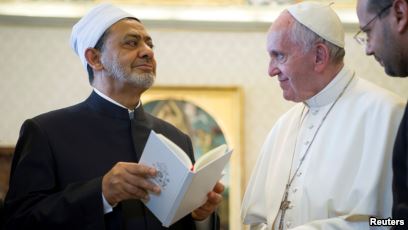 His Eminence Dr. Ahmad el-Tayeb, the Grand Imam of Al Azhar Al Sharif, on Monday morning met several top religious, intellectual and cultural personalities who participated in the ‘Global Conference of Human Fraternity’, organised by the Muslim Council of Elders under the patronage of His Highness Sheikh Mohamed bin Zayed Al Nahyan, Crown Prince of Abu Dhabi and Deputy Supreme Commander of the UAE Armed Forces, at Emirates Palace in Abu Dhabi.

Appreciating the rich discussions and in-depth sharing of ideas that took place during the sessions and workshops of the conference, the Grand Imam said that the event highlighted the human essence of religions as well as the noble ethical values enshrined in their teachings that lay the foundation for the prosperity and happiness of the human race. He noted that the conference opened doors for achieving peace, coexistence and tolerance among human beings irrespective of their religions and cultures.

The Grand Imam reiterated the pivotal role and responsibility of religious leaders in setting an example and promoting peace and love as essential values that should prevail among the followers of various religions. He urged religious leaders to work hard towards building bridges of dialogue and cooperation among different religions. This requires confronting hardliners with isolationist ideology with courage – both those who harbour an extremist view of religious teachings and those who seek to completely dissociate religion from everyday human life.

Dr. el-Tayeb also commended the efforts of the UAE in hosting this important conference and said it reinforced the country’s sincere determination to promote righteous ideas and the eternal values of tolerance and coexistence.

His Highness Sheikh Mohamed bin Zayed Al Nahyan earlier received the Grand Imam of Al Azhar and His Holiness Pope Francis, Head of the Catholic Church and sovereign of the Vatican City State, on their arrival in Abu Dhabi on Sunday evening, following which both religious leaders headed to their residence in the same vehicle.

The two religious heads are scheduled to participate in several important events in the UAE capital later today.