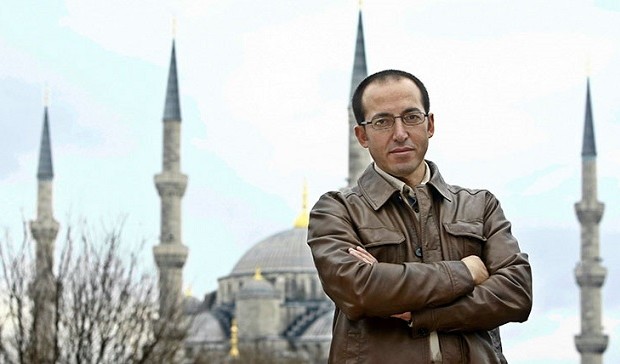 Turkish novelist Burhan Sonmez was left for dead by his attackers in 1996, but he survived and after more than a decade recuperating in the United Kingdom, he returned to his motherland as a successful writer, channeling his experience and anger into creativity.

What he couldn’t achieve as a human rights activist and lawyer, he did as a writer, creating awareness about human sufferings and finding ways to responding them.

Speaking at a forum that focused on the power of writers to promote peace at the Sharjah International Book Fair (SIBF), the author of ‘Istanbul, Istanbul’, said: “In 1996 when I was a human rights lawyer, Turkish Police came to kill me, they left me as a dead man but I was lucky to survive. I went into exile in Britain for treatment and there I was mostly in bed and had nothing to do, that’s when started writing and after 10 years I returned to Turkey and received the country’s biggest literary prize.”

Sonmez returned to Turkey in 2006 and came out with his debut novel ‘North’ in 2009, but it was his second book, ‘Sins and Innocents’ that got all the attention, winning Sedat Semavi Literature Prize in Turkey, apart from a host of other accolades.

“I want to thank my attackers for creating a novelist out of me. We cannot design our destiny, but we have a free will and power to do anything we can. How we react to a situation is entirely in our hands, I decided to use creativity to heal my wounds, it was a personal way of finding treatment. As human beings, we have in our heart something bigger than our own personality and at some point we see some other person coming out of us,” he added.

While on duty, shooting a documentary in war-torn Liberia, Lobo was kidnapped by the vey guys whose lives he was picturising, however, his art helped him escaped.

In real life, unlike in movies, says Lobo, justice always doesn’t prevail, with bad guys getting away with it most of the time and good guys usually suffer.

“In the aftermath of Liberia’s bloody civil war, I was following a warlord who had a change of heart and was seeking redemption. He was travelling across the country asking for forgiveness of those he had tortured and whose relatives he had killed. There I saw how powerful forgiveness is,” said Lobo, whose debut novel ‘Mr Iyer Goes To War’ was released in November last year.

Amidst the chaos the warlord’s journey of redemption, Lobo was kidnapped by a group of young men and his camera helps him befriend his kidnappers.

“We were in a slum of child soldiers who had previously served this warlord and I was lost shooting a scuffle and suddenly I was lifted from behind and the next moment we were speeding away in a truck. Initially, I was scared, I had a camera in my hand and they were trying to snatch and every time they tried I took a picture and then began the story of pictures and selfies with the kidnappers, eventually paving the way for my escape,” said, whose documentary on the life of Liberia’s war victims and child soldiers won him an award at the Sundance Film Festival.

Citing the cases of Lobo and Sonmez, Iraqi novelist and short story writer Ali Ghadeer says literature and creativity has the ability to redress what politics destroys.

Ghadeer, who was captain in the Iraqi Army before 2003, saw from close quarters the tragedy of human sufferings.

“In Iraq, before 2003 and even after that I saw that revenge only destroys, while forgiveness and reconciliation has the power to build and create civilisations. Forgiveness can bring more gains to humanity than justice,” said Ghadeer, who was here to promote his latest novel ‘Swastika’.

Citing the example of Prophet Mohammad’ (PBUH) general amnesty to all Makkans after the conquest of Makkah, he said: “In Prophet Mohammad, we have the biggest example of forgiveness and the kind of good it can bring. When he forgave the very people of Makkah who had persecuted him for years and had forced to flee, he won their hearts and mind, creating a civilisation based on tolerance and forgiveness that spread across the world, had he decided to take revenge the story would have been different.”