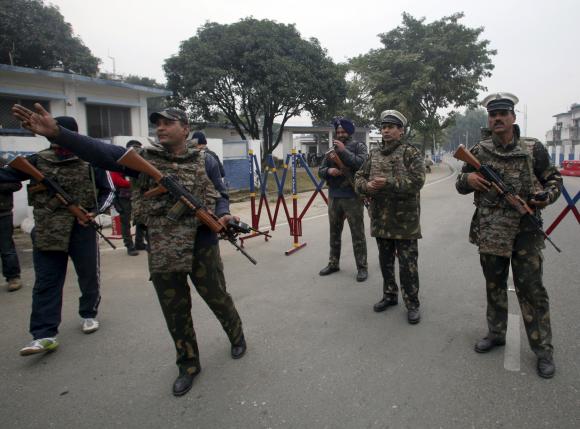 THE LEVANT NEWS — A rapprochement effort between India and Pakistan appeared to be in jeopardy on Monday, as Indian security forces battled for the third day to clear out militants who attacked one of its air bases and killed seven soldiers.

The foreign secretaries of the nuclear-armed neighbors are due to meet for talks on Jan. 15, building on a thaw in relations after a surprise visit by Indian Prime Minister Narendra Modi to Pakistani counterpart Nawaz Sharif last month.

But an Indian government official said India was now considering whether to go ahead with the talks or not, and that a final decision will be taken once the operations to secure the Pathankot Air Force base in Punjab state are over.

The government official, who requested anonymity, said it could take another 48 hours for the base to be secured, and by then the government hoped to have more information about the attackers and what links they may have to Pakistan, if any.

On Monday, the United Jihad Council, an alliance of more than a dozen pro-Pakistan militant groups based in Pakistan-administered Kashmir, claimed responsibility for the air base attack, according to a statement from the group’s spokesman.

“The attack is a message by Mujahideen (militants) that no sensitive installation of India is out of our reach,” said UJC spokesman Syed Sadaqat Hussain in a statement, a copy of which was seen by Reuters.

The attack on the base, which started before dawn on Saturday, is a rare targeting of an Indian military installation outside of the disputed Kashmir region.

But gunfire could still be heard at the base on the third day of operations. It was unclear how many militants remained at large, if any.

As well as the seven Indian security personnel killed, 22 had been wounded.

“Operations will continue to be conducted until we can render the base fully safe,” said Singh.

Pakistan has condemned the attack and said it wanted to build on the goodwill created by the impromptu meeting between Modi and Sharif last month.

Separately, late on Sunday, the Indian consulate in the northern Afghan city of Mazar-i-Sharif came under attack.

Indian security officials have given conflicting accounts on whether the attackers at the Pathankot air base were still active after Home Minister Rajnath Singh declared on Saturday evening that they had been “neutralized”.

The reluctance of officials to declare the mission complete appeared to reflect an abundance of caution until all the attackers’ bodies had been accounted for. The sound of continuing gunfire from the base added confusion to the picture.

RELATED COVERAGE
› India mulls options on Pakistan talks after air base attack: source
A senior federal government official said earlier on Monday that two militants hiding in the administrative block of the base had been killed on Sunday, but authorities had yet to recover the bodies. The official said six militants had been killed.

“But every inch of the air base has to be secured before we call off the operation,” said the official in New Delhi, who requested anonymity.

Thousands of police were scanning hotels, markets and forested areas in the city of Pathankot around the base, to ensure no more militants were hiding, said police official Manoj Kumar.

“Our biggest concern is to protect public spaces,” Kumar said. “The militants who entered the air base must have a local network coordinating with them.”

Manish Mehta, an Indian army spokesman, said the military was working at a “very fast pace” to defuse live hand grenades and gather the remains of the dead militants.

“The air base is large and we have been working all night to ensure that the base is totally in our control,” Mehta said early on Monday.