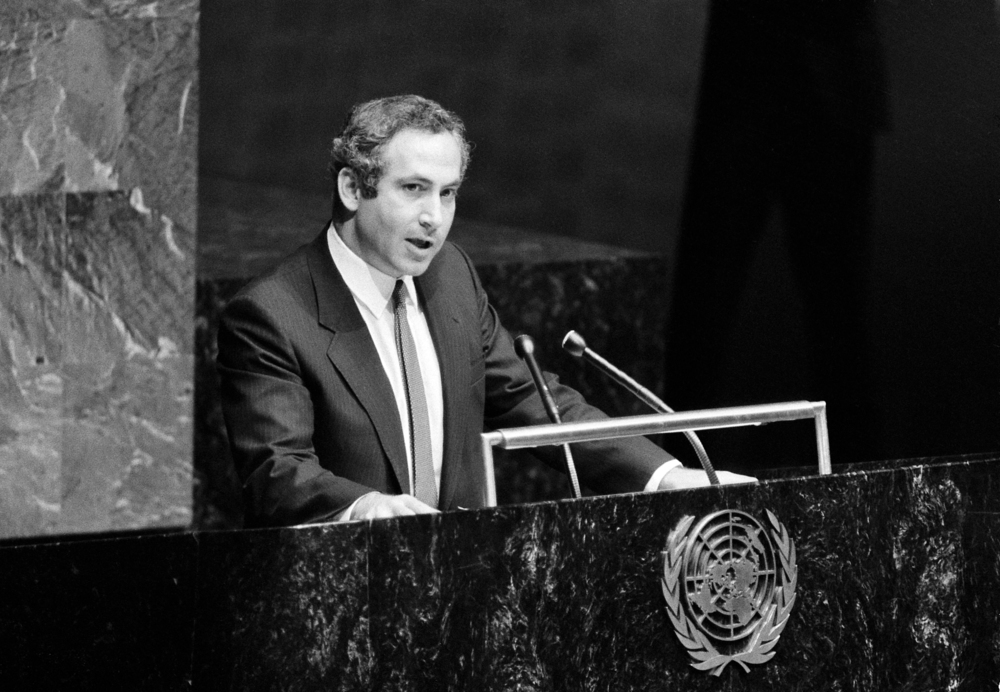 At the Security Council, Netanyahu is preaching the Tanakh

By Lamis Beshara --World leaders gathered at the 72nd meeting of the UN Nation’s General Assembly, not to denounce the violence and barbarity driving the world today but rather to confirm their choices for war by maintaining and reiterating same stances against each other’s without any hope for change, as opposed to what Mr. Netanyahu would want to portray.
Most western leaders if not all, wisely choose to follow Israel’s instructions when it comes to their policies, leaving beside their democratic principles and values and the moral values of the State in order to preserve their security.
Thus, perceiving the world through the Israeli prism means having same enemies and allies, means declaring war against any country aiming at embracing its sovereignty and least but not last means abiding by the same principles. Principles dictating to neglect violations, atrocities, and crimes in one place but recognizing them in another, same way, the international criminal court of justice, the United nations as well as many different international organizations and most wester powers turn a blind eye when it comes to Israel’s illegal colonization, racist apartheid, massacres in Palestine and Lebanon, its constant violations of human rights and of international law, its involvement in Syria and elsewhere and in its revealed connection with the terrorist “Jihadi” militancy today… Are all non existant, but Assad and Khamenei are. Since those same instructions dictate to criminalize the Syrian and Iranian regime, definitely when such countries are both taking security measures to protect their existence from an expansionist not Iran, but an Israel who is still occupying parts of Lebanon and Syria while developing a great alliance with a degenerated Arab world led by radicalism and ignorance.
Most western leaders have again chosen to close their eyes to the 10000 Yemeni victims, the thousands of displaced and the 500 000 children suffering cholera and malnutrition, have chosen to forget about the massacres committed there, not to address or investigate in any massacre committed by the same terrorist groups and on a daily basis in Irak, Afghanistan and Pakistan and have also forgotten to hold Israel responsible for its use of weapons of mass destruction as well as all types of internationally prohibited arms but to point at Assad’s involvement in an alleged chemical attack when refusing to undergo transparent investigations same way US did before in Irak’s Saddam Hussein.
Declaring war on terrorism can’t mean in any way the refusal to cooperate with a government undergoing a great war against terror for years and can’t mean paving the way and facilitating the circulation of its members and of other mercenaries from Turkey then securing them a great international coverage.
Your pragmatism wants to call this an “offensive war” but how can it be when you pretend to defend yourselves from nation’s whose rights of existence is denied? who have been systematically attacked since more than 50 years now? And who are according to you, an inferior category, less equal in rights and chances? It’s meaningless to mention that wars are all led in fact against states aiming at embracing their sovereignty and economic independence because they are looking to free their states from a tyranny enslaving most western powers today bringing them to compromise the basic human and ethical values in exchange of their security. So there’s no surprise when Mr. Netanyahu run by the same ideology of terrorist groups today, shout loudly the prevalence of religious ideology over any other basic human right, claiming that Hebron is a Jewish and not a Palestinian city where the patriarchs and matriarchs of all Jewish people are all buried according to the Tanakh and not to any scientific fact this time.

Lamis Beshara is a Palestinian writer based in Beirut.