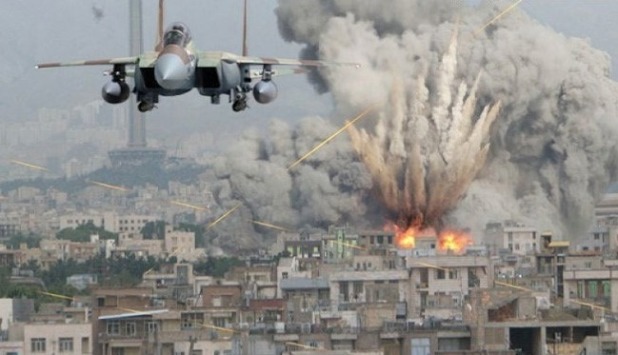 Assad’s forces push into key IS stronghold in eastern Syria

Syrian government forces pushed into one of the last remaining urban strongholds of the Islamic State group in the country’s east on Friday, following days of fierce fighting and intense Russian airstrikes that involved cruise missiles from the Mediterranean, activists and officials said.

The push into the town of Mayadeen came as al-Qaida-linked fighters attacked a key central Syrian village at the crossroads between areas under government control and those controlled by insurgents, activists said.

Taking Mayadeen would mark another blow to the extremist group, which has lost wide areas of Iraq and Syria in its self-declared caliphate over the past year.

Fierce battles are still expected in the town that over the past months became one of the extremists’ main centers after losing other strongholds in Iraq and Syria.

According to the Britain-based Syrian Observatory for Human Rights, Syrian forces and allied militiamen entered western parts of Mayadeen, including the town’s wheat silos compound and the sheep market.

Syria’s state news agency SANA said troops killed many IS fighters on the western outskirts of Mayadeen and captured western parts of the town. The Russian Defense Ministry announced its submarines fired 10 cruise missiles on Thursday at IS positions outside of Mayadeen.

Airstrikes on the town and nearby areas over the past days have killed and wounded scores of people, including 15 civilians — women and children among them — who were killed when a missile slammed into a government-held neighborhood in the city of Deir el-Zour on Thursday evening.

In central Syria, the attack on the village of Abu Dali in Hama province was led by al-Qaida-linked Hay’at Tahrir al Sham — Arabic for Levant Liberation Committee and also known as HTS. It came two weeks after insurgents attacked a nearby area where three Russian soldiers were wounded.

Earlier this week, Russia’s military claimed the leader of the al-Qaida-linked group was wounded in a Russian airstrike and had fallen into a coma. The military offered no evidence on the purported condition of Abu Mohammed al-Golani.

The al-Qaida-linked group subsequently denied al-Golani was hurt, insisting he is in excellent health and going about his duties as usual. The group’s fighters have been gaining more influence in the northwestern province of Idlib and northern parts of Hama, where they have launched attacks on rival militant groups, as well as areas controlled by the government.

Abu Dali had been spared much of the violence and had functioned as a local business hub between rebel-run areas and those under President Bashar Assad’s forces.

The Observatory said al-Qaida fighters captured several areas in the village on Friday. The HTS-linked Ibaa news agency did not mention the attack but said Russian warplanes were bombing areas the group controls in northern Syria.

Violence in eastern Syria has escalated significantly in recent weeks as Syrian troops with the help of Russian air cover have been closing in on Mayadeen.

The DeirEzzor 24 monitoring group said the missile in the Thursday evening airstrike that killed 15 hit near a school in the Qusour neighborhood. Three children and three women were among those killed, the group said Friday, blaming IS for the attack. The school and a nearby residential building were destroyed.

Syrian troops broke a nearly three-year siege on parts of Deir el-Zour last month and are now fighting to liberate the remaining parts of the city from IS.

In other developments, Russia’s military said one of its helicopters had made an emergency landing in Syria but that its crew was unhurt.

According to the Defense Ministry, the Mi-28 helicopter gunship landed in Hama province on Friday due to a technical malfunction. The two crewmen were not injured and were flown back to base. The ministry said the helicopter was not fired upon.

The ministry’s statement followed a claim by IS-linked Aamaq news agency, which said the group had downed a Russian helicopter south of Shiekh Hilal village in Hama.

Also Friday, the Russian military accused the United States of turning a blind eye and effectively providing cover to IS operations in an area in Syria that is under U.S. control.

The Defense Ministry’s spokesman, Maj. Gen. Igor Konashenkov, said IS militants have used the area around the town of Tanf near Syria’s border with Jordan — where U.S. military instructors are also stationed — to launch attacks against the Syrian army.

The area has become a “black hole,” posing a threat to Syrian army’s offensive against the IS in eastern Der el-Zour province, he added.

The Russian accusations likely reflect rising tensions as U.S.-backed Syrian forces and the Russian-backed Syrian army — both of which are battling IS — race for control of oil and gas-rich areas of eastern Syria.