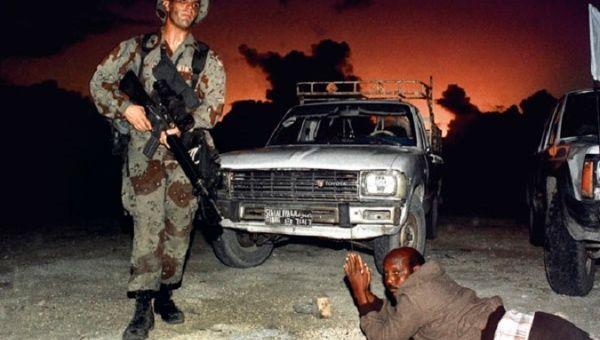 With the war in Ukraine, tensions over Taiwan, and the emergence of new alliances in the Middle East, this summer has been challenging for U.S. foreign policy. Washington has struggled with how to respond, and the issue of human rights and its role in these various hot spots is never far from the conversation.

A new brief by Aslı Bâli addresses a key question of our time: Can military action ever be justified in the name of promoting and protecting human rights? And why does the U.S. intervene in some cases, but look the other way — or fist bump — in others?

In a recent interview with RS, Bâli spoke about the problems with Washington’s current approach to human rights and why restraint is needed to preserve America’s credibility in this arena.

Bâli is a Professor at Yale Law School and a Non-Resident Fellow at the Quincy Institute. She previously taught at the UCLA School of Law where she served as the founding Faculty Director of the Promise Institute for Human Rights and the Director of the UCLA Center for Near Eastern Studies. Bâli’s research focuses on public international law — including human rights law — and comparative constitutional law, with a focus on the Middle East.

What is the problem with the current US approach to human rights?

A second challenge of unilateralism is that the United States has historically claimed to promote and protect human rights at the very same time that it undermines the multilateral institutions that are designed to afford exactly those kinds of protections.

How does this approach play out in the U.S.’s military and economic policy?

And that mix of reasons for pursuing the policy is one where human rights may be very heavily promoted to justify and defend the action, but at the end of the day, may fall to one of the lower priorities once an operation is underway.

Why does the U.S. only intervene in some cases and not in others?

Our human rights advocacy strategy tends to be focused disproportionately on countries that are our adversaries, while we fail to use a range of policies that are available to us to ameliorate practices amongst our allies —where we would actually have more leverage.

Human rights is not a register that primarily should be understood through a Manichaean lens of which is our ally, which is our adversary, where you have completely different approaches to the promotion and protection of rights in the one context, versus the other punishments, sanctions, coercion for adversaries and a blind eye and a set of excuses for allies.

On the one hand, in the Middle East, we look away from human rights. In our own hemisphere, we make it supposedly the centerpiece of our foreign policy, and it becomes the basis for excluding adversaries. What really remains consistent across the board is a logic of allies and adversaries.

What do you say to people who think we should use militarism to pursue human rights?

There’s a means/ends problem intrinsic to the very idea that military force can be used for humanitarian ends. When you add the fact that geopolitical calculations drive which contexts can be intervened in and which cannot —independent of the severity of the humanitarian crisis —the likelihood that this tactic is going to actually serve meaningful humanitarian purposes diminishes dramatically.

For example, over time, U.S. operations on the ground in Afghanistan increasingly tended to be presented to the American public as human rights enhancing or intended to serve humanitarian purposes. And yet, the outcome of 20 years of operations on the ground in Afghanistan have been extraordinarily damaging to the Afghan civilian population. And that leaves U.S. credibility in question, not only amongst the populations where the U.S. purports to be engaging in human rights activities, but also in the minds of the U.S. audiences that become increasingly confused about what exactly the objectives are that are being pursued.

Can restraint be used to promote human rights?

Restraint means first relying much less on military force. Engaging in military intervention, or the use of coercive economic tools less would itself have a net positive effect for human rights globally.

Restraint also means relying more on the other tools in our arsenal around diplomacy and engagement. We have a tendency to overemphasize what can be achieved by American power and under emphasize the many other tools that are available in our toolkit. We could do a lot of good by focusing on our ability to deploy international assistance, and also by supporting multilateral institutions that provide forms of direct aid.

So what can the U.S. do to preserve and protect human rights?

To those who would like to see civilian human rights protected across the board, I would suggest that they draw their attention to the places that are genuinely generating the most severe crises, such as climate change, conflict driven migration, and the current global food crisis.

Some of the places where we see the most acute forms of socio economic deprivation —resulting in millions being on the brink of death— are places where we are directly responsible for the conditions that have produced this kind of need. There are many places where we could ameliorate human rights, short of the use of force by deploying other levers such as international assistance.

Yes, we have maybe the strongest military in the world and that may make it likely that policy elites will disproportionately rely on coercive tools. But we’re also the wealthiest country in the world. We have the largest economy and the greatest capacity to address socio economic deprivation.

Tags:
Bâli is a Professor at Yale Law School and a Non-Resident Fellow at the Quincy Institute., Human rights, Somalia, Syria, UCLA, war