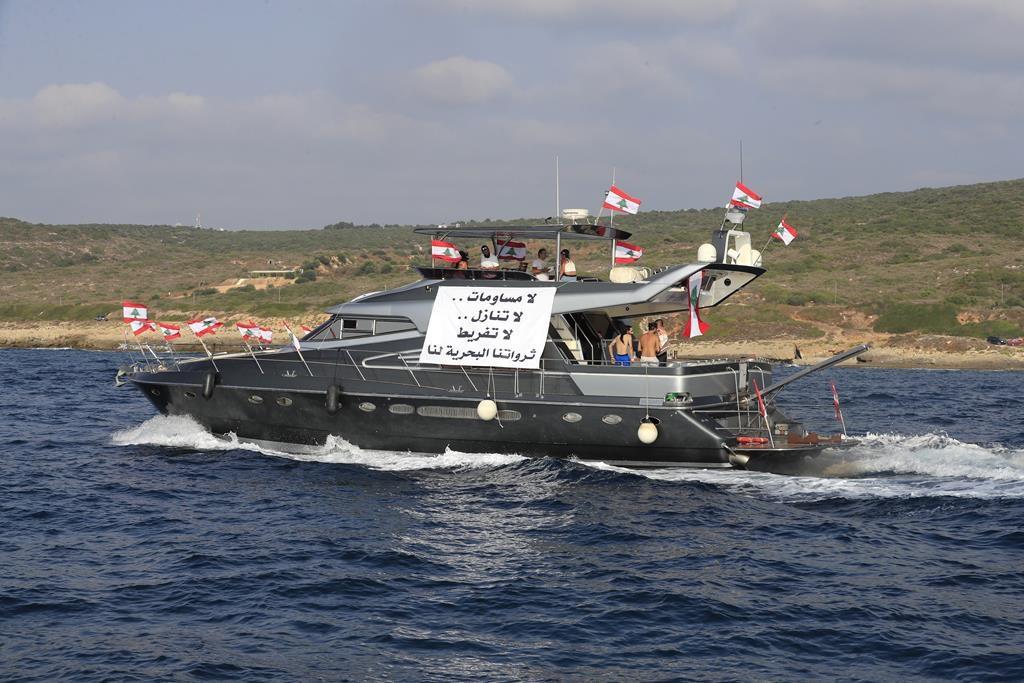 Image credits: Lebanese protesters ride in a yacht with an Arabic banner that reads "No compromises No waivers, No negligence, Our maritime resources belong to us," during a demonstration demanding Lebanon's right to its maritime oil and gas fields, in the southern marine border town of Naqoura, Lebanon, Sunday, Sept. 4, 2022. The protest came days before the mediating U.S. envoy is scheduled to land in Beirut to continue maritime border talks. (AP Photo/Mohammed Zaatari)

Lebanese activists stepped up their campaign to protect the country’s oil wealth amid efforts to resolve a maritime border dispute with Israel.

Dozens of boats set out on Sunday from the port of Tripoli and ports along the coast escorted by the army toward Ras Al-Naqoura, the southern border point, under the slogan “Lebanon's Oil Belongs to Lebanon.”

A civil campaign organized the demonstration, with 40 boats taking part.

President Michel Aoun backed the protest by sending a greeting on Twitter to “the youth of Lebanon participating in the maritime campaign, in adherence to Lebanon's full right to its waters, borders and wealth.”

He said: “The unity of our position is the guarantee of our rights. Our wealth belongs to our generations who are looking forward steadily to embodying their aspirations for a homeland that they will make according to their dreams under the shadow of the country's flag."

Activists raised Lebanese flags and banners in English and Hebrew on the boats, affirming their country’s rights to its oil and demanding the restoration of its maritime borders and oil wealth.

According to reports, US mediator Amos Hochstein could arrive on Tuesday in Beirut with draft principles approved by Israel.

Other information said Hochstein's visit aimed to “calm down” the situation.

Campaign coordinator Hani Suleiman told Arab News: “We arrived off Ras Al-Naqoura, and in front of us were two war cruisers, and those on board were on alert.

Suleiman said activists on the boats took to the sea and swam in the Ras Al-Naqoura area, waving Lebanese flags.

The indirect negotiations stopped last May due to differences over the size of the disputed area.

The demarcation of the maritime borders is of great importance to Lebanon, as it would facilitate the exploration of oil resources within its territorial waters.

Protests led to the postponement of the excavation process scheduled for the beginning of September.

Last week, the US tried to narrow down the dispute between Israel and Lebanon over the demarcation.

White House officials said Washington had revived the spirit of consultation for the Lebanese and Israeli negotiators over the borders.

The Jerusalem Post reported that while Lebanon and Israel had not yet reached a final agreement, it was believed there was “sufficient convergence" between the positions to start work on a deal that could result in either the division of gas fields that may intersect on the maritime borderline or financial compensation.