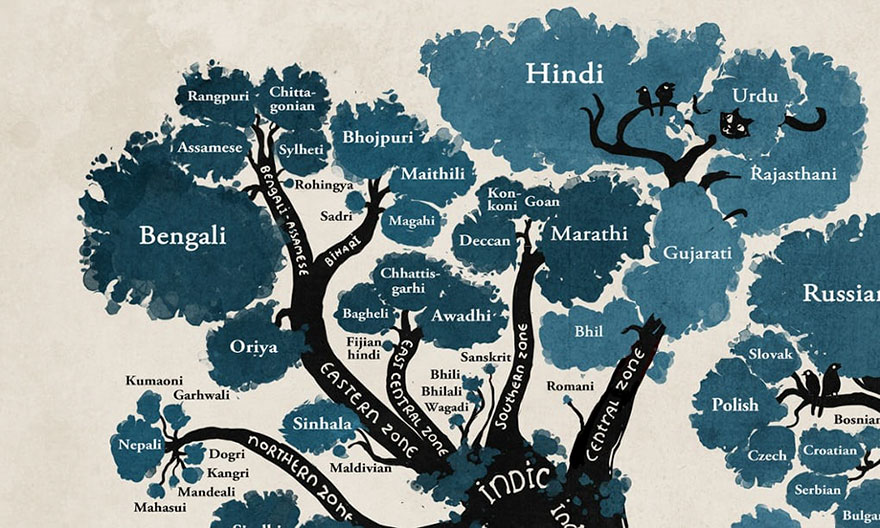 This Amazing Tree That Shows How Languages Are Connected

Using the research data from Ethnologue, Minna has used a tree metaphor to illustrate how all major European, and even plenty of Eastern languages can be grouped into Indo-European and Uralic “families”. The whole image is dotted with languages, with bigger leaves representing those with the most native speakers. But even this detailed image doesn’t cover the immense variety of languages out there: “Naturally, most tiny languages didn’t make it on the graph,” the artist explained to io9. “There’s literally hundreds of them in the Indo-European family alone and I could only fit so many on this page, so most sub-1 mil. speaker languages that don’t have the official status somewhere got the cut.” The European branch splits in three: Slavic, Romance and Germanic. A rather complicated relationship between the Slavic languages is visible It also shows the Germanic roots of English language Surprisingly, unlike its Scandinavian neighbors, the Finnish language belongs to Uralic family By Arthur Blok - 3 days ago
“Work is love made visible” is one of Glen Kalem’s favorite quotes from Kahlil Gibran’s iconic work, The Prophet. The Lebanese-Australian is an award-winning documentary film producer and research historian of the late poet and artist Kahlil Gibran. His research into the creation of Kahlil Gibran and much more is now available on this platform. […]
Read story

By Arthur Blok - 2 weeks ago
Lebanon’s political turmoil cooled down after the country’s parliamentary election in May. The nation started a  new chapter in its dynamic political history with a shift in the balance of power in the country’s 128-seat parliament. The Levant News spoke to two opposition candidates who almost got elected. By Arthur BlokAfter years of political deadlock, […]
Read story