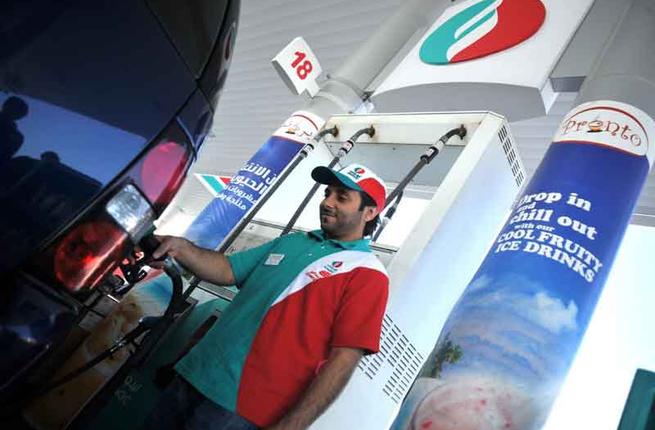 All future Enoc fuel stations to be solar-powered

The Emirates National Oil Company (Enoc) Group will add 48 new stations to its Dubai network by 2020, all of which will be powered by solar panels, while also looking to add to its international portfolio, the group chief executive said.

All future Enoc service stations in the emirate will now be solar-powered, as the Dubai energy company targets the UAE's focus on renewable, nuclear and clean energy sources anad it also said it will be expanding its stations in Saudi Arabia.

The announcement, made during the Water, Energy, Technology and Environment Exhibition (Wetex) 2017, is in line with the group's commitment to the Dubai Plan 2021 to become a smart and sustainable city.

“The world is changing and we’re with that change,” Saif Al Falasi, Enoc's group chief executive, told The National on Monday. “We have to go in line with the shift in technology or otherwise we’ll be left behind.”

The new stations would be added to the company's existing network over the next three years, with the contracts for the works to be awarded next week, Mr Al Falasi said.

Earlier this year, Enoc piloted the first solar-powered service station in the country at its Dubai Internet City (DIC) facility. The station was installed with photovoltaic solar panels on the roof of the canopy, with a peak capacity of 120 kilowatts energy on an ideal day - generating approximately 30 per cent more than the average energy required to run the station.

The excess energy generated is transmitted back to Dubai Electricity and Water Authority's (Dewa) main grid through a solar meter.

"With the success of our DIC service station, we will now install solar panels in all new stations to produce the alternative energy required to run these facilities. We aim to continue to provide our customers with high-quality products and services through expanding Enoc’s geographical footprint across the UAE.”

More than 23 gigawatt hours of solar energy will be generated to power the new stations by 2020, Enoc estimates, minimising the load on Dewa’s grid and power generating stations.

Mr Al Falasi said that after Enoc has completed its domestic expansion plans, including its US$1 billion Jebel Ali refinery expansion project to add 12 storage tanks, the company would look to add more fuelling stations in Saudi Arabia. Enoc is currently working on completing its first phase of retail outlets in the kingdom totalling 15 stations, and plans to double that figure in its second phase.

A $500 million loan was provided in August by seven international and regional banks, and Mr Al Falasi said this capital was set aside for its growth strategy, available for Enoc to tap should the demand rise.

“The expansion of the refinery and the new [UAE] stations are financed through our cash flow, but that doesn’t mean that we’re not looking to do business internationally," he said.

“Financing for the time being isn’t required, but as a company, you should always have a back-up. It will be used when it’s needed.”