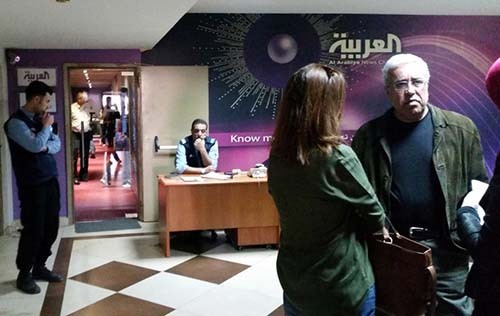 By Magda Abu-Fadil* — Director of Media Unlimited in Lebanon —

“My wife is pregnant and will deliver in a month,” said one staffer visibly shaken by the news and concerned about the heavy responsibility ahead of him.

A sense of panic and despair filled the bureau as the impact of the sudden decision from the Dubai-based administration began to sink in.

The reason given: the channel had received several threats and although it stuck it out for a while, decided to shut down all its operations in Lebanon and lay off 27 reporters, producers, directors, technicians and others.

“Al Arabiya channel announced it had decided to reorganize its operations in Lebanon, given difficult and challenging conditions on the ground and to ensure its employees’ safety,” said one news report.

It added that it would continue to cover Lebanese news with the help of experts, contracted workers and service providers.

It also said all those laid off would be get their full legal rights.

But Lebanese Information Minister Ramzi Jreij said there was no security justification for the closure and asked if it wasn’t due to a politics stemming from strained relations between Lebanon and Arab Gulf countries, notably Saudi Arabia.

Lebanon’s official National News Agency reported some of the correspondents may stay on board but it wasn’t clear who would be spared the unemployment lines.

The closure was effective immediately on Friday, the Moslem day of prayer and rest.

“Al Arabiya and Al Hadath Leave Lebanon” headlined the news in Saudi-owned daily Asharq Al Awsat. The paper was founded by a son of the current king.

The paper added insult to injury by publishing a caricature of the Lebanese flag with the words “The Lebanese State” in the middle of its national emblem, the cedar tree, and a caption that reads “April Fool” in clear mockery of the country’s dysfunctional government.

Lebanon has been without a president for two years and its bickering cabinet members are a reflection of its fractious sectarian political system.

“Asharq Al-Awsat’s caricature of Lebanon is rejected,” tweeted journalist Sawssan Abou Zahr from the daily Annahar. “You can shut down Al Arabiya but you can’t insult a whole country just because you’re at odds with one political faction. Enough already.”

A technician who’d been at the bureau for four years couldn’t believe it. He tried to access his email at 3:00 a.m. only to discover it wasn’t working.

“The ‘Story of Hassan’ documentary that was aired a few weeks ago exacerbated the security risks,” said another staffer referring to a program featuring Iran-backed Hezbollah leader Hassan Nasrallah that showed him in a negative light.

That raised the possibility of the bureau taking a hit and there was talk of moving it to another location but all staffers continued working in it.

Until today it was located in a building full of news bureaus across from the prime minister’s office in downtown Beirut.

“The (Beirut) employees are officially off Al Arabiya’s payroll and there’s been no talk of transferring them to other bureaus or to headquarters in Dubai,” said one of those who faced grim job prospects in the country.

Local media pay much lower salaries, if and when they can be found, in an overall unsettled economy.

Saudi Arabia and Iran have been duking it out regionally and internationally in various fora, including media affiliated with, or beholden to, the two countries’ regimes.

This was probably one manifestation of the Saudis’ hardline position towards Iran and Hezbollah. The “Party of God” has been relentless in its verbal attacks on Saudi Arabia and Arab Gulf countries.

It was also payback time from Riyad for its displeasure with recent actions and statements by Lebanese Foreign Minister Gebran Bassil, an ally of Hezbollah, particularly his refusal to condemn an attack on Saudi Arabia’s embassy in Tehran.

The kingdom was to have provided the Lebanese army with a much-needed infusion of funds totaling $3 billion to beef up its military capabilities. But the recent flaps put a speedy halt to that aid package.

Some reporters at the bureau declined to be quoted by name, while others wouldn’t even discuss the matter.

A journalist at another news organization who came upon the shocked lot, who provided me with details and photos, and who wished to remain anonymous, was also beside himself at the speed with which the shutdown took place.

The company’s lawyer apparently showed up, summoned all the workers, and paid them several months’ severance.

“There are no jobs in Lebanon,” said a stunned staffer. “What can we do? Everyone has kids, families, responsibilities and payments to make. We were surprised by the decision.”

One staffer who’d been with the company since 2009 said it had never faltered in providing them with their rights, was one of the most respected in the Arab world, and that it respected its employees.

“But the decision was taken. We thank them for everything over the years, despite this shocking verdict,” he said.

The closure comes at a particularly critical time for Lebanese journalists and media, with sharp drops in revenues and severe cutbacks in human resources.

Several leading dailies said they’d go from print to online, or shut down completely due to financial difficulties.