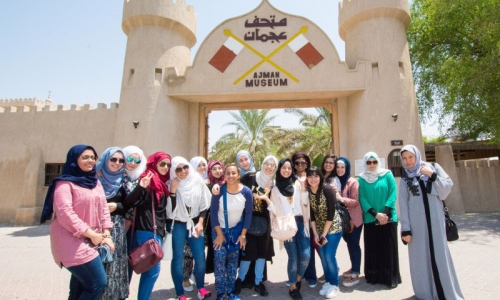 With the launch of the 2020 QS World University Rankings, QSWUR, today, Ajman University, AU, ranked among the top 800 institutions globally – a jump in more than 100 places over last year’s results.

The new position puts AU in the top 2.8% of universities worldwide. The rankings also indicate that AU is now among the top 1.7% of institutions in the Arab world.

QS also ranked Ajman University fourth for international faculty and sixth for international students in the entire world. The latest rankings serve as another landmark milestone in the 31-year pioneering history of AU – the inaugural private university in the GCC and the first institution in the UAE to accept expatriate students.

“Thanks to the wise leadership of H.H. Sheikh Humaid bin Rashid Al Nuaimi, Supreme Council Member, Ruler of Ajman and Chairman of Ajman University’s Board of Trustees, we have achieved what most universities only aspire to do. Being recognised as one of the most diverse institutions on the globe is a truly remarkable distinction,” said Chancellor Karim Seghir.

“Our performance in 2020 QS World University Rankings clearly indicates that AU is now firmly established on the global map – a goal articulated in our vision of being internationally recognised as one of the leading universities in the Arab world,” he said.

Ajman University continues to rank among the top eight in the UAE, per the 2020 QS Report. With 35 academic programmes – many of which have earned prestigious international accreditations – across nine academic colleges, AU is one of the region’s most comprehensive universities, as well as being the oldest.

“It is inspiring to see the remarkable progress of Ajman University as it continues to make a mark for itself on the global scene of higher education,” said Ashwin Fernandes, QS Regional Director for Asia and MENA regions. “The new direction which started propelling the institution forward a few years ago is bearing fruit as the progress is now clearly seen and articulated not just in the overall ranking, but also in various indicators.”