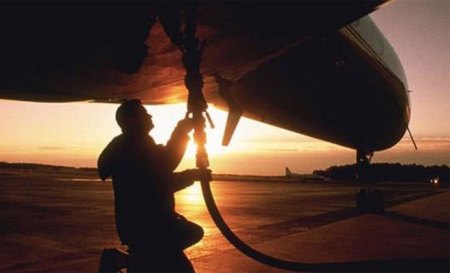 Airlines are starting to hedge against the risk that fuel prices could be driven higher by rules targeting another industry’s environmental performance.
Brent crude for 2020 rallied in the third-quarter, a period in which spot prices fell, as some carriers began seeking protection against higher fuel costs caused by rules to cut sulphur emissions from ships, according to Thibaut Remoundos, founder of Commodities Trading Corp. The regulations, set out by the International Maritime Organisation, take effect in January 2020.

“Consumers, and in particular airlines, have been pushing prices in what seems to be a sudden IMO 2020 wake-up call,” said Remoundos, whose firm advises industrial commodity consumers on hedging strategies. “The back end of the curve has moved significantly higher.”
Brent for 2020 rose by 1.3 per cent to $71.05 (Dh260) a barrel since the end of the second quarter, according to fair value data compiled by Bloomberg. Front-month contracts, normally the most traded in the market, dropped 3.6 per cent.
The 2020 rules will force the world’s maritime fleet to use fuel containing less sulphur, a pollutant blamed for human health conditions such as asthma. The new limit, apart from for ships with scrubbers, will be 0.5 per cent, down from 3.5 per cent in most places today.

The requirement to switch has created a widespread expectation that there will be an initial demand surge for diesel-like products. A critical question for airlines is whether oil refineries will cut output of jet fuel as they try meet the surge in buying from shippers.
No matter what happens, oil analysts expect the new ship-fuel rules to boost crude oil prices that are sometimes used for the aviation industry’s hedging programmes.
The IMO’s regulations are likely to increase airline fuel costs, analysts at UBS Group AG, Macquarie Group Ltd. and Jefferies Financial Group Inc. have all said in recent weeks.
It’s too soon to see evidence of an increase in hedging in airlines’ earnings statements. Of 14 European and US airline filings compiled by Bloomberg, only two — Southwest Airlines Co. and Ryanair Holdings Plc — had hedges in place for 2020 or beyond in the most recent quarter of reporting. Ryanair’s approach wasn’t being influenced by IMO, the company’s CEO said July 23. (The bulk of airline reporting for the current quarter will start in early November.)
The increase in hedging for the new ship-fuel rules hasn’t just been restricted to crude markets, or to airlines. Shippers have also been active in locking in spreads to help with the adoption of scrubbers that allow ships to keep burning more sulphurous fuels. That’s seen some companies buying fuel oil contracts and selling diesel ones, to protect against an unexpected surge in fuel oil costs.
The difference between fuel oil and gas oil for January 2020 has narrowed markedly in recent months. High sulphur fuel oil has gained 8.9 per cent on low sulphur gas oil over that period, according to ICE Futures Europe and Bloomberg fair value data.
“We have seen an increase in the interest for doing scrubber hedges,” said Mads Hemmingsen, a trader at Global Risk Management A/S. “The consolidation above $70 and the subsequent move towards $80 has sparked interest for hedges in general.”