Breaking News
Home / In Depth / Against Our Better Judgment: The hidden history of how the U.S. was used to create Israel

Against Our Better Judgment: The hidden history of how the U.S. was used to create Israel

Reviewed by Ziad Hafez — Many ask about the role of the United States in the creation of Israel. The book under review provides an unequivocal answer: the United States was instrumental in the creation of a Jewish state in the Arab lands of Palestine at the expense of its inhabitants who were there for centuries. Yet, the book shows how pro-Israel American Zionists have manipulated the government, the media to promote the interests of Israel at the expense of the interests and ideals of the United States. The book sheds a new perspective unknown to many about the manipulations of the pro-Israel group in the United States and Great Britain. It is a ‘must read’ for the general reader as well as for the scholar.
None of the established book publishers in the United States is publishing the book under review. Its copyrights are the property of the author Alison Weir, the Executive Director of an organization called “If Americans Knew.org”, or “What every American needs to know about Israel/Palestine”. The organization has its logo on the book’s spine and back cover. The low price is an indication that the publishing organization does not have the same overhead costs of established publishing houses!
The author is also the President of another organization called the Council for National Interest (CNI), an organization founded by two former US Congressmen Paul Findley and Paul McCloskey. Both organizations are devoted to the advocacy of a US foreign policy in the Middle East consistent with American interests and not those of a foreign power, i.e. Israel. The contents of the book are probably the reason why no book publisher in the United States would consider publishing it because of the explosive and meticulously documented information about the duplicity and outright illegal if not criminal behavior of the Zionist movement in the United States, Europe, and of course Palestine.
The book was originally a paper to set the record straight about the US-Israel relationship (p .iii). However, “the article grew longer and longer as [she] realized how much there was to be explained” (p. iii). As she received more information that needed confirmation and as further research confirmed such received information and uncovered more facts “the article became a book” (p. iii). The gist of the argument developed in the book is that the pro-Israel movement in the United States “has promoted policies that have exposed Americans to growing danger, and then exaggerated this danger (while disguising its cause), fueling actions that dismember some of the nation’s most fundamental freedoms and cherished principles” (p. 2). She tersely adds, “All this for a population that is considerably smaller than New Jersey’s” (p. 2). 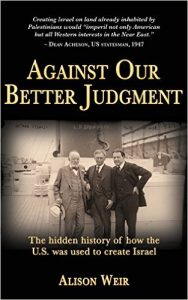 Tags Against Our Better Judgment: The hidden history of how the U.S. was used to create Israel Alison Weir Paul Findley Paul McCloske Ziad Hafez