An electron microscope image of SARS-CoV-2 (yellow) emerging from the surface of cells (blue/pink).

Aerosols are the crucial missing link in Covid-19 infections

Dutch pollster and data-analyst Maurice de Hond exposed a relationship between the spread of the COVID-19 virus and the weather (especially specific humidity). Which can be found here. In his second contribution to The Levant News he elaborates how aerosols play an important role in the infection with the virus.

By Maurice de Hond
Do aerosols play an important role in the infection with the virus, or not? This is the most crucial question in the fight against the spread of the virus. The answer will have a huge impact on developments, not only in the coming months, but also in the years to come.

The World Health Organization (WHO) and its Dutch equivalent the RIVM say they do not, or hardly do. This means that the entire control policy is aimed at keeping people at a distance from each other (1.5 meters in the Netherlands). And if you (professionally) come close to an infected person, you wear optimal protection.

As I have indicated in earlier writings there is another important way in which people can become infected. Via so-called micro-drops (aerosols), which under certain circumstances continue to float in indoor spaces. People, who are present in these spaces, run an enormous risk of being infected by them. This finding is supported by various scientific papers since 2004.

I have given examples earlier of super spread events (SSEs) where a large proportion of those present have become infected. The choir rehearsal near Seattle and the event on March 5th in Kessel are well documented. Church services, choir rehearsals, après-ski, cruises and naval ships, nursing homes; everywhere where many people were infected in one fell swoop, this could not have happened because an infected person was so close to all those individuals present that the big outbreak started.

It is much more likely that this happened because of aerosols. Discussion was whether the patterns found in the past for influenza also apply to COVID-19. I have now found even more evidence that this is indeed the case.

It is important to realize that the recent findings of Homeland Security’s virus laboratory came from research into the COVID-19 virus and not from research into influenza. Those findings, however, resemble the conclusions from earlier influenza research:

– The virus can’t cope well with higher temperatures and higher humidity, and certainly not if they’re accompanied by sunlight;
– The virus thrives best indoors at low humidity;

I came across a study from 2013, in which experiments were carried out to determine which types of droplets are excreted when one coughs and how they spread indoors at different humidity levels.

This is that study: High Humidity Leads to Loss of Infectious Influenza Virus from Simulated Coughs. In this setup all kinds of measurements were taken at different levels of humidity. 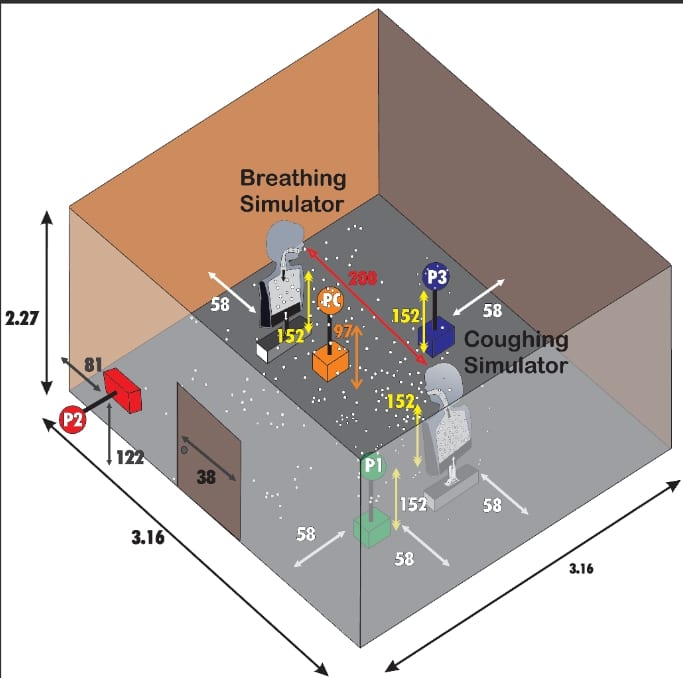 The research concludes that after 60 minutes in an indoor space with an air humidity below 23%, the chance of infection is 5 times higher than above 43%. Results that are in line with what I have shown in many blogs over the past month and a half.

Now there are two possibilities:
– Either to stay on the line of the WHO and RIVM and you say the aerosols don’t play an important role in the spread of the virus. So you focus on just keeping social distance.
– Or you recognize the fact that these aerosols do play a major role in explosive contamination in indoor spaces and you take adequate measures to ensure that the chance of being infected by aerosols in shops, offices, schools, care institutions, homes, ships, churches, halls, restaurants, cafés, clubs and party halls is kept to a minimum. And this can be done by ensuring an air humidity of more than 6 g/kg and good ventilation.

Now the good news is that meetings with several people have been forbidden since mid-March. So, for the time being, super spread events have been kept to a minimum (except in healthcare institutions). But now that we are slowly trying to start up more economic and social activities again, a policy to reduce the spread of the virus via aerosols will become very important.

Governments around the world are making a serious mistake if they continue to ignore the spread via aerosols and thereby keep the chances of infection in indoor spaces unnecessarily high. Think about the results of this research: At an indoor humidity of 43% (at 20 degrees), the chance of being infected by aerosols is 5 times smaller than at a humidity of 20%.

The good news is that there is usually a lot of water in the outside air between May and September. And that has an effect on the humidity in indoor areas. But that’s not always the case. And certainly not the rest of the year. If you use air conditioning in the summer, the humidity indoors gets lower and that can be detrimental when there is less than 6g/kg in the air).

Maurice de Hond is a well-known Dutch pollster and entrepreneur. This article was first published on his own website.