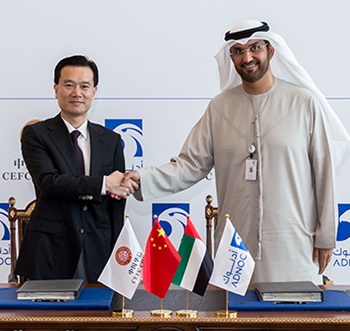 Abu Dhabi National Oil Company (Adnoc) said on Wednesday it is looking at strengthening its partnerships with Chinese energy, chemical and technology companies.

Dr Sultan Al Jaber, Minister of State and Adnoc Group’s chief executive officer, held a series of meetings with government and company leaders in Beijing to discuss boosting the relationship between the UAE and China, as well as Adnoc and Chinese firms.

Among those were meetings with Wang Yi, China’s Minister of Foreign Affairs, and Ning Ji Zhe, vice-chairman of China’s National Development and Reform Commission. The two sides discussed growing cooperation between the UAE and China in the fields of technology, energy, chemical, investment and commerce.

Al Jaber expressed the interest of the UAE to further enhance those ties. He also met with senior officials from Huawei Technologies during his visit to Beijing.

“Adnoc’s focus on the application of advanced technology, in support of tis 2030 growth strategy, is one area where China’s experience in developing Artificial Intelligence and predictive data, through companies such as Huawei, could be deployed to create additional value from its resources,” he said.

“Adnoc is keen to advance and lead the digitisation of the oil and gas industry.”