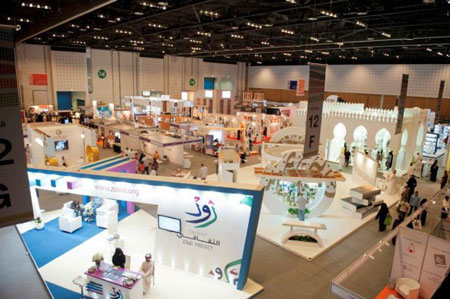 The fifth day of Abu Dhabi International Book Fair, ADIBF 2019, saw the conclusion if its cultural programme with a spotlight on Indian literature and culture.

As this year’s official Guest of Honour, India has participated with an exceptional line-up of writers, authors and journalists from the UAE and across the globe.

Held under the patronage of His Highness Sheikh Mohamed bin Zayed Al Nahyan, Crown Prince of Abu Dhabi and Deputy Supreme Commander of the UAE Armed Forces, ADIBF is organised by the Department of Culture and Tourism – Abu Dhabi, and will take place until 30th April.

The Illustrators’ and Art Corner, one of the major activities of the exhibition, announced the names of its competition’s winners.

Catherine Donaldson won the Professional Illustrator category with a work influenced by the poems of Dr. Talal Al Tunaiji, while the Amateur Illustrator award went to Raghad Ali from Al Maali School. The panel of judges included Hassan Zahreddine, illustration instructor at the American University of Beirut, and Shaikha Al Zaabi and Manal Abdul Ahhad, representatives from DCT Abu Dhabi.

In another event, the late poet Ousha bint Khalifa Al Suwaidi was honoured in a special ceremony. Dr. Rafia Ghubash, author of the Al Suwaidi’s biography, and Emirati writer Nasser Al Dhaheri, spoke at the ceremony hosted by Isabelle Abu Al Hol on the Main Stage. The ceremony celebrated the extraordinary life of the late Emirati poet Ousha bint Khalifa Al Suwaidi, who is known as Fatat Al Arab.

The fifth day of ADIBF welcomed visitors to a poetry reading, joined by an outstanding group of poets from around the world, including Ben Okri from Nigeria, Afra Atiq from the UAE, Zeina Hashem Beck from Lebanon, Frank Dolaghan from Ireland and Dr Talal Al Junaibi from the UAE.

A morning session titled ‘The Importance of Local Stories and the Future of Digital Publishing’ was hosted by Manar and Sharifah Al Hinai, founders and partners of Sekka Magazine. They spoke about their experience in digital publishing, as their magazine is run and written by individuals from the Gulf region. They also discussed the impact of locally inspired stories, highlighting the challenges and the opportunities within the digital sphere.

In another session, ‘Exploring the Life of the Mahatma’, writer Birad Rajaram Yajnik discussed peace and nonviolence as detailed in his book about Mahatma Ghandi, the founder of modern India. Additionally, the famous Indian author Manoj Das contributed in a session titled ‘My Little India’, which was also attended by UAE based Indian journalist Gopalakrishnan.