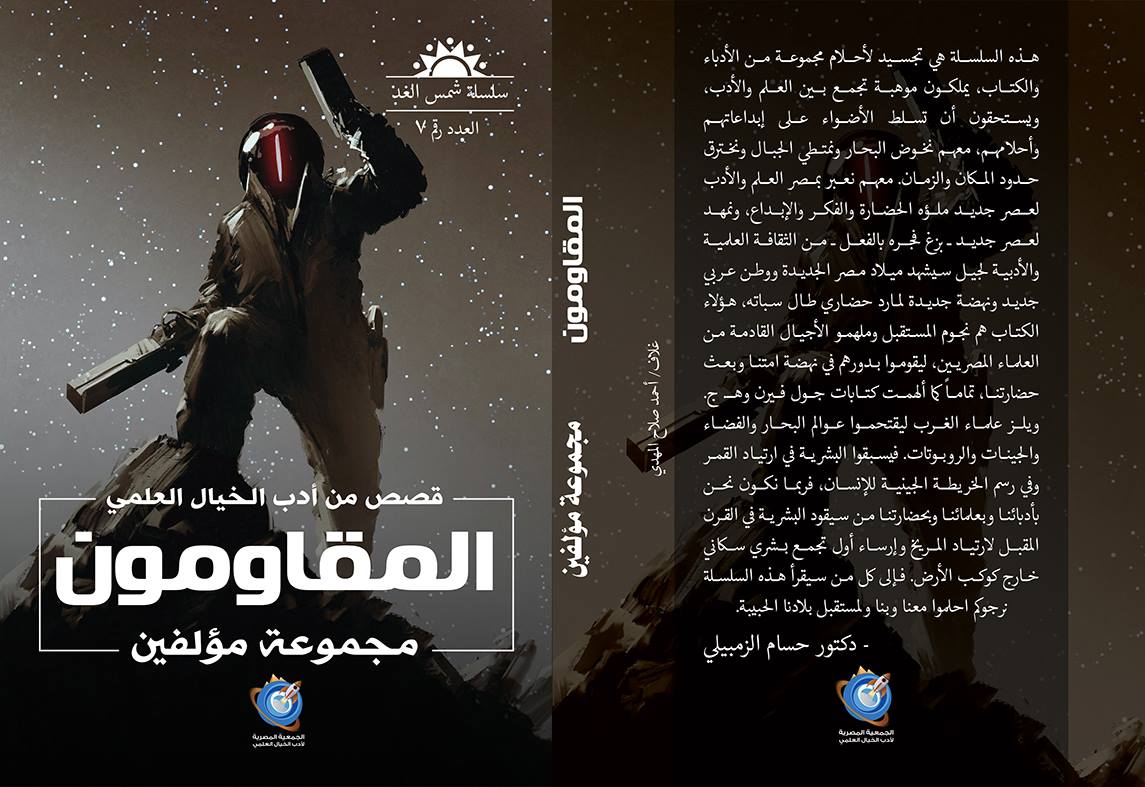 A tête-à-tête with Mahmoud Abd Al-Rahim, on the still tenuous relationship between resistance lit and Arabic SF

This interview is centered on the seventh edition of Shams Al-Ghad, an anthology series published by the Egyptian Society for Science Fiction (ESSF). The seventh Shams Al-Ghad was titled Al-Muqawimoun (المقاومون), the Resistors, dedicated to resistance literature, broadly conceived.

Emad El-Din Aysha: Let me explain first of all that of all the 21 stories in the anthology, and they were all substantive and innovative stories, your story “Fires of Love” (نيران العشق) was the one that really stood out for me. You have a time-portal device that allows the Palestinian resistance to see what the Israelis are going to do, one day in the future, in a parallel universe but what really allows the Palestinians to win the war is love, a love story between a boy and girl separated and persecuted by the Israelis.

That’s such a radical and wonderful idea; science and war not saving the day, but innocent, passionate love. How did you get it? What was your inspiration?

Mahmoud Abd Al-Rahim: “Fires of Love” is a story that clarifies just how important love is to entire people’s, and not just to individuals. Sure it’s a love story between a boy and girl, but where the man refuses to give up his sweetheart and stands up to an enemy everyone is terrified of, confronting them with his one-sentence slogan, ‘I want my love’.

Some may see this as reducing the Palestinian cause to a simple romantic tale or thinking that love conquers all but the point here is that you should commit to your love. You have to struggle for it., fight for it. The young man, the hero, has been searching for the love his life and those who joined him in solidarity have been looking for the same thing in their lives. This love is the love of land and nation. The love story of a boy and girl is merely the spark that ignited the seething passions in the occupied territories, drawing people out to fight for their loves, their land and children.

So yes I do believe that love can free a nation. More than that, it is my conviction that love can also lead a nation to a better and brighter future.

PANEL OF EXPERTS: Mahmoud Abd Al-Rahim is on the right. Next to him is his brother Wael. On the left is a fellow SF and fantasy writer Islam Abd El-Rahman.

EEA: Have you ever read The Bullet is Still in my Pocket (الرصاصة لا تزال في جيبي) by Ehsan Abd Al-Qudus or anything by Palestinian author Ghassan Kanafani (غسان كنفاني)? And what is ‘your’ definition of resistance literature?

MAR: Unfortunately I haven’t read the novel The Bullet is Still in my Pocket by the great writer Ehsan Abd Al-Qudus, although I have watched the movie adaptation. The idea that love can be what drives you to survive and persevere is a real and substantive idea there. I have read Ghassan Kanafani’s novel Men in the Sun, about the journey of Palestinians who had to leave their land and their sufferings. The importance was how distance meant pain and so much suffering.

EEA: What did you think of (المقاومون)? Personally I was surprised at the turnout. We had more stories I think in one anthology than ever before. Did you have any favourite stories of your own?

MAR: The anthology is an impressive and diverse collection that proves that the creative imagination of the resistance author, when mixed with science fiction can produce classic works and brilliant ideas.

Of the most distinguished stories there is “The Most Powerful Weapon” by Abdulhakeem Amer Al-Tweel, when he speaks about how the invader used the oldest and most effective weapon to overwhelm the resistance, namely, treason.

How many nations have been destroyed and how many leaders fallen thanks to treason, and we Arabs have Al-Andalus as a fine an example as ever.

MAR: I think it’s still a long road ahead for us to change resistance literature from the military to the scientific, and that’s because in our minds resistance is tied up with weapons and secret operations behind enemy lines. But there are good attempts to break out of that and your story “Body of Resistance” is proof positive of that.

EEA: What did you think of my own story “Body of Resistance” (جسد المقاومة)?

MAR: Like I said your story “Body of Resistance” is an example of resistance literature in the science fiction genre, since you relied so essentially on science and advance and utilizing the scientific energies and skills available in our society and employing them right. That is how the resistance weaponized science and tricked the enemy with the help of a medical doctor and a computer engineer.

That’s where SF comes in, highlighting the role of science in everyday life and just how important it is to everything, and resistance is no exception.

A story I congratulate you on!

NUMBER SLOT: This is a certificate I got for my story, which came in at no. 5, a second time. Shame I did have any traitors in my contribution!

EEA: Please also tell me your brother’s two stories: “An Umbrella Under the Sun” (مظلة تحت الشمس) and “The Hero of the Arabs” (بطل العرب) by Wael Abd Al-Rahim? Aren’t you happy that President Sadat was proven once and for all, to an Arabic audience, to be dedicated to liberating Palestine?

MAR: I was honoured to have my brother Wael Abd Al-Rahim contributing to this volume with two stories. In his first story, “Umbrella Under the Sun”, he talks about the success of the Arabs in defeating the Israeli occupation, after they united. The only lingering problem however was where the Jews should go, as the Jews had stopped being generations that knew no homeland except for this one – in their opinion – and Wael found a way out from this dilemma  by repopulating them randomly to all the other countries in the world.

Also his other story “Hero of the Arabs”, and it’s a joint story written with the help of your good self Emad E-Din Aysha. It’s a classic ‘What if’ story – what if we could go backwards in time to a key turning point in history, and change it. The event that is altered in this case lead to a whole new timeline developing that changes the future for all, a key point in time of tremendous consequence – if it could be done – because any change to the past, no matter how minor, results in a major overhaul in the future. What is known as the ‘butterfly effect’.

Here in this story the protagonist succeeds in taking us on a journey back in time to prevent the assassination of the Egyptian President Sadat which lead to his continued support and defence of Palestinian rights and persistence in liberating them once and for all. But, as I said, toying around with the past has its price. The person who went back in time, from the future, has his motivator – the Palestinian cause. Without this motivator however the boy inventor doesn’t get around to making his time-machine, or even continuing his education. But that’s the price the inventor was willing to pay, a worthy price for a noble and worthy cause he wholeheartedly believes in.

CENTER FOR EXCELLENCE: Mahmoud standing next to Dr. Hosam El-Zembely, director and founder of the ESSF. This was at the Cairo International Book Fair, pre-COVID.

In the end I want to thank, deeply and warmly, the Egyptian Society for Science Fiction and its members with an especially thanks to Dr. Hosam El-Zembely and engineer Muhammad Naguib Matter and their valiant efforts in promoting this branch of literature in the Arab world, and their embrace of youthful talents.

And thank you for this this talk, and thanks for your stories that we enjoy so much.