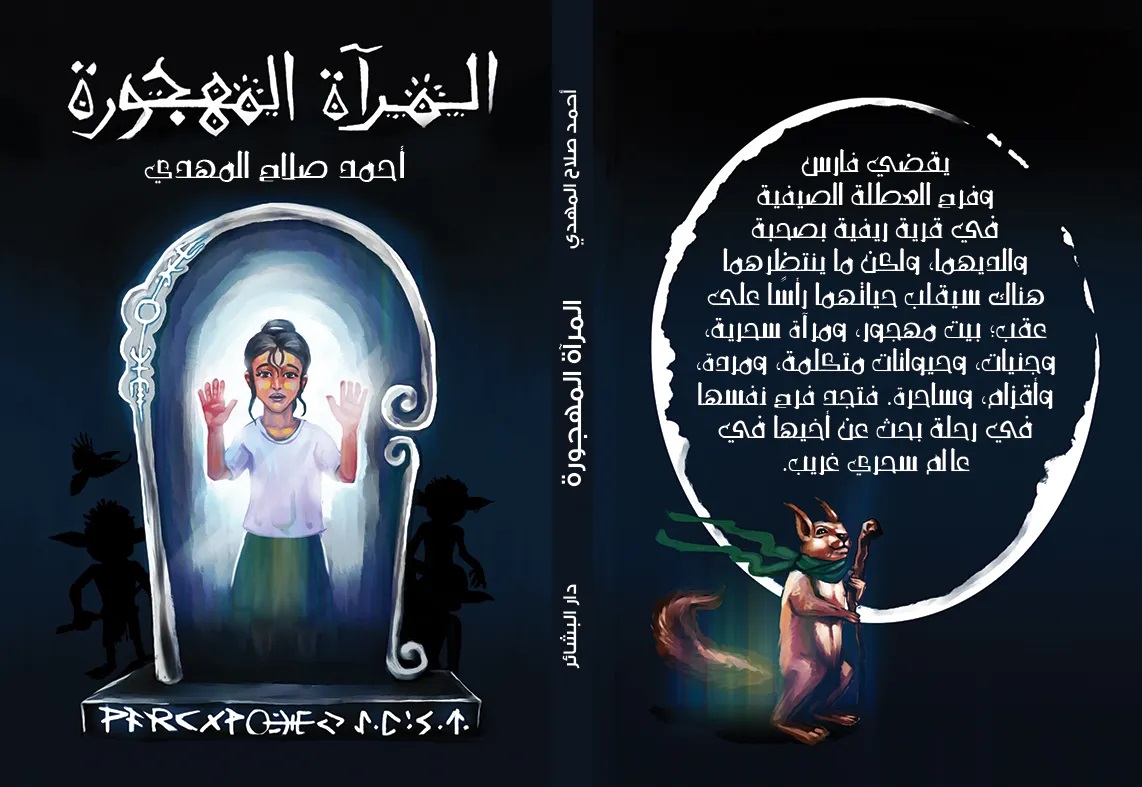 Story Synopsis: Two kids on summer holiday in the countryside in Egypt hear rumours of a haunted house and one of them, Faris, goes there and is never seen again. His twin sister Farah follows his trail and passes through an enchanted mirror and finds herself in a mysterious forest with talking squirrels. She learns of the evil witch Murjana who has her brother, feeding on the youth of others to stay beautiful and in her prime, and Farah does battle with the sorceress by liberating many of her former victims, saving her brother and the residents of this magical world.

Dear Ahmed Al-Mahdi, first of all, let me thank you for the thoroughly enjoyable read that is The Marooned Mirror. It brought back fond childhood memories of being at school reading The Wizard of Oz and The Lion, the Witch and the Wardrobe. So that’s my first question. Were you in any way influenced by those classics novels?

Actually, The Chronicles of Narnia and specially the first book The Lion, the Witch and the Wardrobe, was one of the inspiration sources for my novel The Marooned Mirror. I always loved the idea of leaving the mundane world behind, and travelling to a magical world full of wonders. I was inspired also by Alice’s Adventures in Wonderland, which was one of my favorite novels in my childhood. Lastly I was inspired by the anime movie Spirited Away, where a young girl found herself in the spirits world, in a journey to save her parents. It has many of the magical elements that I love and defines Hayao Miyazaki movies.

Where did you get your inspiration for the story from? And how long did it take you to write?

The first idea that popped into my mind was about a village boy who wakes up one day to find that the whole village disappears and he has to solve this mystery alone. After I toyed a little with the idea, I didn’t go far into it, and I scratched the whole thing and went back to the drawing board. The other idea that I got was about what if the boy disappeared not the whole village, and he has to come back. Thus, the idea of the magical mirror in the abandoned house came to mind. I began writing the novel in 2015 and I finished it in 2019 after many drafts. Many characters were added or changed, like the boy of the original idea became the brother and sister. And Simon the squirrel, originally he appeared later in the novel, but I liked his character so I made him appear early.

There’s a lot of blending of Western and Arabic fantasy in the novel. You have enchanted forests and talking squirrels but also genies and enchanted water wells. Was this deliberate on your part?

I grew up with the folk tales my grandmother used to tell to me, I later read The Thousand and One Nights and many folk tales from different cultures and specially the tales of Brothers Grimm and Hans Christian Andersen and many others. I love to create worlds mixing all the elements of folk tales I read or heard, like what I did in my other novel Reem: Into the Unknown where I mixed the European folktales features like the witch and the lonely hut in the woods with the Egyptian culture superstitious like the fear of the black cat.

The heroes in the story are Farah and Faris, a sister and brother team. You have this quite a lot in your novels, such as the brother and sister in The Black Winter. Even in Malaz: City of Resurrection Qasim is enchanted by Jihad, the daughter of the Outcast warriors, and they become brothers in arms in effect. (Qasim was an only child and never knew his father). Is family a theme in your writings and do you like male-female duos?

I found that the relationship between siblings, especially between brother and sister is very strong. And I think that family should stick together through thick and thin. Also, your family will always have an effect on your life in general. That’s why you might find that this is a theme in my novels. In my first novel Reem: Into the Unknown Reem life changed because she lost her parents and have to live with her grandmother. In Malaz: City of Resurrection Qasim’s life is shaped by the teachings of his grandfather, and the legacy of his father. and the plot of The Black Winter revolves around Ziyad and Farida, and their journey to find their parents in the apocalypse.

The antagonist in the novel, Murjana the evil witch, is a woman just as the primary hero is female, Farah. She saves her brother Faris from becoming one of the evil minions of the sorceress and it’s her purity of heart that releases the Guardian and cleansed the Spring Spirit. Was this deliberate on your part?

I like to have female protagonists and female antagonists in my novels, and I have always been fascinated by the evil witches, my grandmother tales was filled with them, just like the tales Umm Hassan the old women told to Farah and Faris. I have an evil witch in Reem: Into the Unknown too. You can say that Reem is the protagonist and her grandmother is the antagonist, while Saif was an observer, someone we can see the story unfolds by his eyes, and explore the world with him. He was, as the grandmother said, just an unfortunate stranger who got caught up in things that are beyond his understanding, greater than the tangible world he touches.

But in The Marooned Mirror I wanted to change the cliché of have the witch old and ugly, so I made her young and beautiful. It might teach the children and young-adults a lesson too, that evil is not always ugly and repulsive, and sometimes it’s pretty and alluring. Fortunately Farah was smart enough not to fell into the trap of Murjana, and she chose wisely to help those who are in need of help.

Come to think of it why did you call the brother Faris, which means ‘knight’ in Arabic, if he needs his sister to save him?

In the original draft, faris was supposed to be the one who saves his sister from the world of the Twilight Wood. But as I write the story I found that Faris was reckless while Farah was wise for her age. I loved the idea of the innocent one saves the days. And it actually helped me in the plot and world building as the magic in this world works on thoughts and feelings, and that’s what helped Farah save her brother, and the forest eventually.

I participated once in a literary conference, FIYAHCON 2020, and wouldn’t you know it I was in the panel on food in science fiction and fantasy. While I use food in my SF stories as a world-building tool really fantasy comes more to mind, and even I mentioned ‘Turkish delight’ in The Lion, the Witch and the Wardrobe novel.

You have Farah almost becoming an evil troll when she eats the food of the witch, and her poor bother not nearly being so lucky. What role does food play in fantasy and why do you use it in your novel?

Farah was lucky to have Simon the squirrel to warn her not to eat the nasty food, while Faris was not so lucky, and was so hungry, so he ate from it but not a lot. The food can be part of the world building; it can be magical and have benefits like the Lembas bread in Lord of the Rings, or it can be dangerous like the food that turned Chihiro's parents into pigs in Spirited away. Food can play a great role in science fiction too; the whole world of Dune is shaped by the Spice. I also like to read food descriptions in fantasy novels especially if it was something imaginative and unusual. I used food in The Marooned Mirror in different ways. It was something to comfort Farah in the hole of the squirrels, and it was something terrible that turns innocent animals and children into trolls and ogres.

By the way, The Matrix: Resurrections has magic mirrors in it. Did they get that idea from you, or Alice in Wonderland?

I think we both got the idea from Alice in Wonderland, even in the first Matrix there are many reference to it. Neo received a message to follow the white rabbit, also Morpheus mentioned it when he said ‘You take the red pill, you stay in wonderland, and I show you how deep the rabbit hole goes’. I don’t have a rabbit as a one of the main characters in my novel but I have a squirrel.

On the topic of the overlap of SF and fantasy, you’ve have many accomplished works on SF that I love but  you seem more drawn to fantasy. What advantages do you find in writing fantasy and fairy tales, and how can Arab SF benefit from our rich history of fantasy?

I love both SF and fantasy, but I find writing fantasy easier for me, maybe because you have all the freedom to build your world as you wish. Magic can explain a lot of things that science can’t explain. In fantasy, one can travel between worlds by magic artifacts, but in SF, you have to explain the science behind travelling between worlds or plants. But I also love writing SF because I’d love to write about our future specially in post-apocalyptic one, or a future where we travel among the stars and discover planets.

Arab SF can benefit from our rich history of fantasy and mythology by exploring different timelines of alternative history, just like you did in your story Demigods in Time, where the protagonists traveled back in time to meet with Gilgamesh in the city of Uruk. We can surely explore more of this in the Arab SF.

The interview was conducted by Emad El-Din Aysha, a member of the Egyptian Society for Science Fiction and co-author and co-editor of 'Arab and Muslim Science Fiction: Critical Essays' (McFarland, 2022). Ahmed Al-Mahdi was a contributor to the book with his chapter on Arab dystopia.