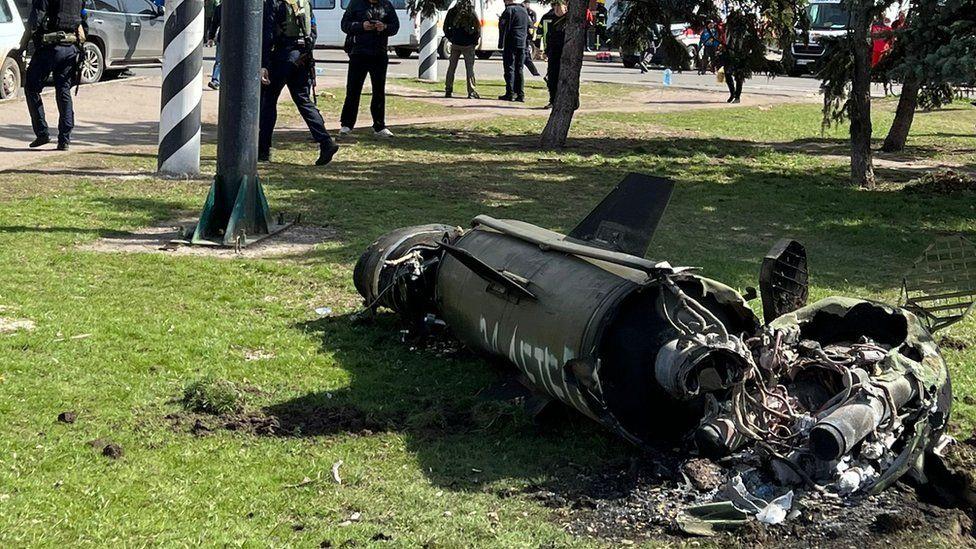 Dozens of people were killed in a rocket attack on the train station in the eastern Ukrainian city of Kramatorsk on Friday as civilians raced to leave the Donbas region in the crosshairs of the Russian army.

At least 35 people died, a rescue worker on the ground told AFP, and the head of Ukraine's railway company said "over 100 were injured," in one of the deadliest strikes of the six week-old war.

AFP journalists on the scene saw the bodies of at least 20 people grouped and lying under plastic sheets next to the station.

Blood was pooling on the ground and packed bags were strewn outside the building in the immediate aftermath of the attack.

The remains of a large rocket with the words "for our children" in Russian was lying just adjacent to the main building.

The attack came as European Commission president Ursula von der Leyen and EU foreign policy chief Jose Borrell headed to Kyiv on Friday in a sign of solidarity with Ukraine.

The attack on the railway station showed "evil with no limits", Ukrainian President Volodymyr Zelensky said.

More than a month into Russian President Vladimir Putin's invasion of Ukraine, Moscow has shifted its focus to eastern and southern parts of the country after stiff resistance torpedoed its plans of an easy capture of the capital Kyiv.

Instead, Russian troops appear to be aiming to create a long-sought land link between occupied Crimea and the Moscow-backed separatist statelets of Donetsk and Lugansk in Donbas.

Heavy shelling has already begun to lay waste to towns in the region, and officials have begged civilians to flee, but the intensity of fighting is impeding evacuations.

In Donetsk, the head of the regional military administration Pavlo Kyrylenko said three evacuation trains had been temporarily blocked after a Russian airstrike on an overpass by a station.

But officials continued to press civilians to leave where possible.

"There is no secret -- the battle for Donbas will be decisive. What we have already experienced, all this horror, it can multiply," warned governor of the Lugansk region, Sergiy Gaiday.

"Leave! The next few days are the last chances. Buses will be waiting for you in the morning," he added.

A barrage of shells and rockets was already hammering the industrial hub Severodonetsk, the easternmost city held by Ukrainian forces in Donbas, leaving buildings engulfed in flames.

"Every day it's worse and worse. They're raining down on us from everywhere. We cannot take it anymore," said Denis, a man in his forties with a pale, emaciated face.

"I want to escape this hell."

Around the capital meanwhile, residents and Ukrainian officials returning after the Russian redeployment are trying to piece together the scale of the devastation.

Violence in the town of Bucha, where authorities say hundreds were killed -- including some found with their hands bound -- has become a byword for allegations of brutality inflicted under Russian occupation.

But Zelensky warned worse was being uncovered.

"They have started sorting through the ruins in Borodianka," northwest of Kyiv, he said in his nightly address.

"It's much more horrific there, there are even more victims of Russian occupiers."

Violence in the area has caused massive destruction, levelling and damaging many buildings, and bodies are only now being retrieved.

"Only the civilian population was targeted: there is no military site here," she said, describing evidence of war crimes "at every turn".

Fresh allegations emerged from other areas too, with villagers in Obukhovychi, northwest of Kyiv, telling AFP they were used as human shields.

And in besieged Mariupol, even the pro-Russian official designated "mayor" of the destroyed city acknowledged that around 5,000 civilians had been killed there.

Moscow has denied targeting civilians in areas under its control, but growing evidence of atrocities has galvanized Ukraine's allies to pile on more pressure.

On Thursday, the EU approved an embargo on Russian coal and the closing of its ports to Russian vessels as part of a "very substantial" new round of sanctions that also includes an export ban and new measures against Russian banks.

In addition, it backed a proposal to boost its funding of arms supplies to Ukraine by 500 million euros, taking it to a total of 1.5 billion euros.

In a show of support, European Commission President Ursula von der Leyen also headed to Kyiv on Friday with the bloc's diplomatic chief Josep Borrell for talks with Zelensky.

En route to Kyiv, Borrell told journalists the EU would supply 7.5 million euros ($8.2 million) to train Ukrainian prosecutors to investigate war crimes, which Russia is accused of committing in the country.

"Ukraine is not a country invaded and dominated. There's still a government to receive people from outside," Borrell said, announcing the EU would reopen its diplomatic delegation in the capital.

And the Group of Seven industrialized nations agreed to more sanctions, including a ban on new investments in key sectors and fresh export restrictions, as well as the phasing out of Russian coal.

At the United Nations, 93 of the General Assembly's 193 members voted to suspend Russia from the body's rights council over its actions in Ukraine.

Russia blasted the move as "illegal and politically motivated", while U.S. President Joe Biden said it confirmed Moscow as an "international pariah."

"Russia's lies are no match for the undeniable evidence of what is happening in Ukraine," Biden said, calling Russia's actions in the country "an outrage to our common humanity."

Ukraine has welcomed new measures on Moscow, as well as the U.N. suspension, but it continues to push for more support.

"Ukraine needs weapons that will allow us to win on the battlefield, and this will be the strongest sanction," Zelensky said in his address, echoing calls from his foreign minister, who earlier asked NATO for heavy weaponry, including air defense systems, artillery, armored vehicles and jets.

"Either you help us now -- and I'm speaking about days, not weeks -- or your help will come too late, and many people will die, many civilians will lose their homes, many villages will be destroyed," Dmytro Kuleba said after meeting NATO foreign ministers in Brussels.