From Broadcasting to Humanitarian Relief: Dyna Fayz, A Syrian Face in London

The Levant Jul 25, 2018 Exclusive, In Depth, Interview Leave a comment

Dyna Fayz, is a Public Figure and TV broadcaster based in London. Raised in Scotland up till the age of 21,she graduated from Glasgow University with a Masters degree in Civil Engineering and moved to London with her family.

Since a young age, Dyna adores mathematics, algebra and problem solving. About 7 years ago she completed a postgraduate degree  in mathematics, then she specialised  in teaching Maths at a secondary and university level to students from different backgrounds and race.

She was always passionate about Media and never had she stayed away from it to the extent that she spent her weekends during university, travelling up and down between London and Glasgow working as a freelance journalist with the BBC World Service, presenting and producing a popular radio show that was transmitted globally in Arabic on Huna London. Luck struck her way and opportunities started arising; her passion in media drove her to gain more experience in TV broadcasting. She started working with ANN, preparing the news and current affairs before she decided to go into production and produce a morning show. Her enthusiasm and hard work were the backbone to the success of several live and recorded shows she appeared in including “Cinema, Cinema” and the live music show that made her one of the youngest tv presenters that managed a live show in the Middle East. Her determination and charismatic personality opened up other opportunities to work with big TV channels like Abu Dhabi TV, MBC, Saudi TV and many more. 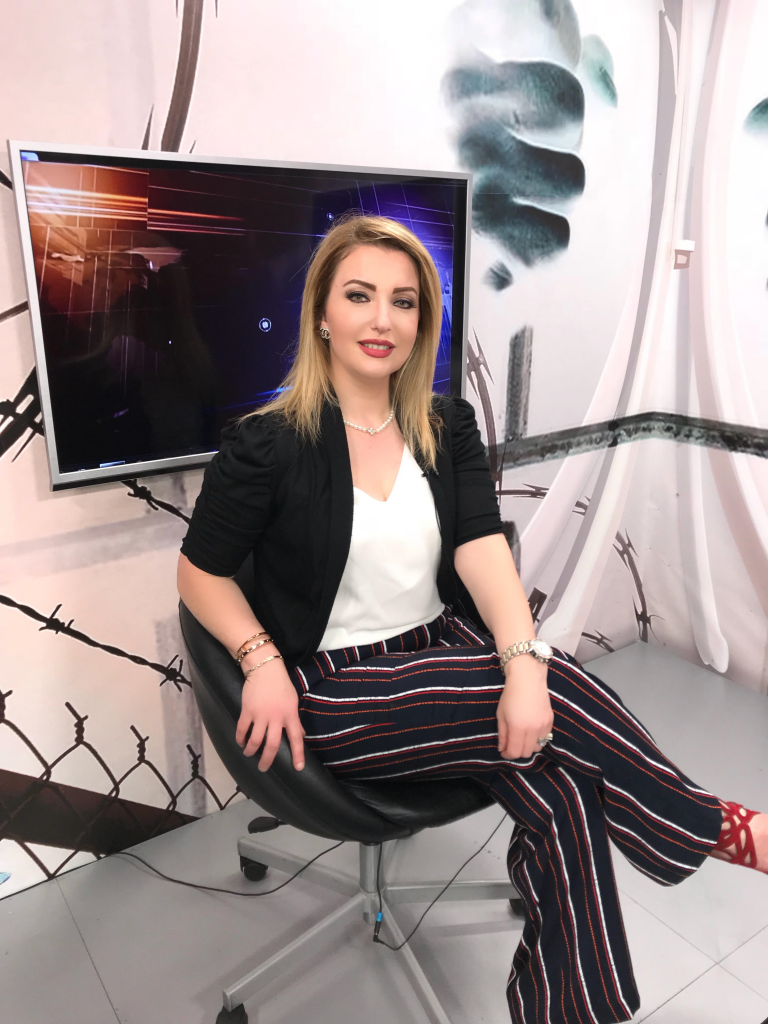 Dyna didn’t feel she was reaching her potential restricting herself to broadcasting in Arabic. In 2014, she started working for Levant TV, a Lebanese channel broadcasting in English, and started producing and presenting a women’s show called “Her Voice”. The show was aimed at women empowerment in all walks of life, celebrating their achievements and rights within western and eastern societies.

Dyna is known for her strong Scottish accent which makes her the one and only middle eastern tv presenter that’s able to broadcast in English and a Scottish accent. She’s now joined WTX news as presenter and senior anchor for the weekly news brief show hoping that she will be able to add a different perspective to news shows. She will also be presenting a unique project runway style show that will bring together fashion designers, stylists, bloggers and make up artists from all over the world.

On a personal level, Dyna is very active in terms of her charity work.

She feels that supporting charities either financially or mentally or even through social media is an obligation and not a choice and believes that women especially should dedicate some of their time offering help to charities. Not to give up all their time but only suggesting a couple of hours a week dedicated to raising money and awareness to help children and families that are in need.

She has attended and hosted several charity events run by different organisations. One of her most important achievements was a fundraising campaign organised by Goodwill Caravan  to help the needy, especially the refugees in camps in the Middle East and Europe. The charity managed to raise enough money to house several family refugees that had no shelter. She’s also involved with Penny appeal, UNICEF and cancer research; charities that are very close to her heart.