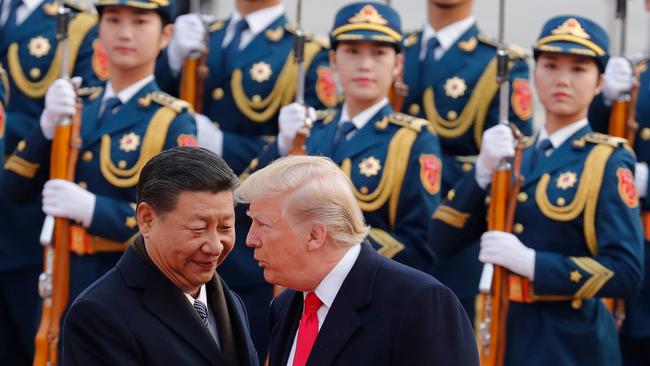 Trump said he had a long conversation on the matter with his Chinese counterpart, Xi Jinping.

"They're working on it right now," Trump told reporters in the Philippines as he prepared to return to Washington after a nearly two-week visit to Asia that included an earlier stop in Beijing. "He's been terrific," Trump said, in an apparent reference to Xi.

Asked about the case Tuesday, China's foreign ministry said it had no additional comment. On Monday, ministry spokesman Geng Shuang said that three American men were being investigated in the eastern city of Hangzhou for alleged theft and that China and the U.S. were in contact over the matter.

"China will handle this case in accordance with law and protect the lawful rights and interests of the people involved," Geng said.

Ball and fellow freshmen Cody Riley, Jalen Hill were questioned last week about allegedly stealing sunglasses from a Louis Vuitton store next to the team's hotel in Hangzhou, where the Bruins had been staying before leaving for Shanghai to face Georgia Tech on Saturday. They were released on bail early Wednesday morning and have been staying at a lakeside hotel in Hangzhou since then.

A source told ESPN's Arash Markazi that there is surveillance footage of the players shoplifting from three stores inside a high-end shopping center, which houses Louis Vuitton, Gucci, Yves Saint Laurent and Salvatore Ferragamo stores.

UCLA returned to the United States on Saturday without the three freshmen, sources told Markazi. Bruins coach Steve Alford declined to discuss the matter after the team's win over the Yellow Jackets.

An anonymous U.S. official told The Washington Post that charges against the three players have been reduced and that the case is headed toward a resolution.