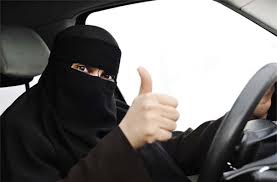 More than 120,000 women in Saudi Arabia apply for licence

More than 190 women drove from both sides of the King Fahad Causeway, the 25-kilometre terrestrial link between Bahrain and Saudi Arabia.
The figure, reported by Saudi TV channel Al Ekhbariya was recorded in 12 hours on Sunday, the day the ban on women driving in the Saudi kingdom was lifted.

Although it has been used by millions of drivers, no woman has ever driven across the causeway in its 32-year history.
The historic day was celebrated with great fanfare by Saudi and Bahraini women who drove to the Eastern Province in a show of support and solidarity.
Saudi authorities said they recorded women driving through other border crossing points between Saudi Arabia and Jordan and Saudi Arabia and Kuwait.

In the capital Riyadh, s Major General Mansour Al Turki, official spokesman of the Ministry of Interior and Major General Mohammed Al Bassami, Director General of the Ministry’s General Directorate of Traffic on Sunday said said that more than 120,000 women have applied to obtain a driving licence in Saudi Arabia.
“Now we have more than 120,000 women who applied for driving licences and we are working on finishing the procedures,” Al Turki said at a press conference held hours after women took to the wheel in the kingdom.
“Demand for obtaining driving licences is very high and an increase in the number of women driving vehicles on the Kingdom’s roads is expected soon.”

Al Turki said that most of the women who have applied for driving licences did not have prior or sufficient driving experience.
Women with no experience took driving lessons at driving schools around the Kingdom while those who carried foreign driving licences are able to exchange them directly for a Saudi licence at 22 centers across the Kingdom, the two officials said.
Women with no experience need to undergo at least 30 hours of practical training at a driving school, while women who are able to drive, but don’t currently hold a driving licence from abroad that they can exchange for a local one, can sit for six hours of practical driving instruction.
The officials said there were no restrictions on women driving in the Kingdom as long as they carry a valid Saudi licence that is suitable to the type of vehicle driven.
“What applies to men applies to women also, the regulations are clear,” Al Bassami said, quoted by the Riyadh-based Centre for International Communication.
Advanced biometric technology will be used to identify the authenticity of driving licences by traffic police.
The officials said that 40 new female graduates trained for traffic accident investigation and management will soon begin working as assistant investigators and will be fully independent investigators after gaining all the necessary experience.
The long-awaited shift in policy means that millions of women will have the right to get behind the wheel.
Lifting the ban on women driving will release Saudi women from their dependence on men in emergency situations and will also benefit Saudi families, especially lower income families, by ending their reliance on drivers, officials said.
Many Saudi men took to social media to voice their support for women driving, with many families joining female family members as they started driving.
“Men were celebrating women driving vehicles. They expressed their happiness with putting this decision into effect and with seeing women driving,” Al Turki said.
Over the weekend, several events in Riyadh, Dammam, Jeddah and Tabuk were held in the lead-up to the lifting of the ban on women driving – to raise awareness of safe driving habits, how best to use the road safely and provide an introduction to traffic laws.
In September 2017, King Salman Bin Abdul Aziz declared that women would be allowed to drive starting June 24, 2018.
The decision is in line with the Vision 2030 blueprint for the future, spearheaded by Crown Prince Mohammad Bin Salman.
Women’s empowerment in all fields is seen as an important element in Vision 2030 and the future of Saudi Arabia.