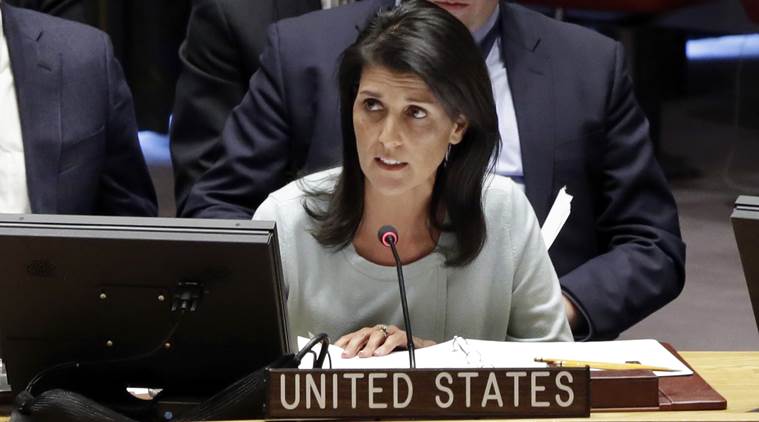 US envoy at UN makes bid for reviving Israeli-Palestinian talks

US Ambassador Nikki Haley on Tuesday discussed reviving Israeli-Palestinian peace negotiations during her first meeting with the Palestinian envoy to the United Nations.

Haley tweeted after her talks with Ambassador Riyad Mansour that the Palestinians should “meet with Israel in direct negotiations rather than looking to the UN to deliver results that can only be achieved through the two parties.”

Mansour told AFP that during the 45-minute meeting Haley “raised the desire to see the two parties engaging in negotiations” and indicated that the United States was considering a fresh bid to revive talks.

“I don’t know at what level they want to do that, but once we receive a request to that effect, we will respond to it accordingly,” he said.

The Middle East peace process has been comatose since former US secretary of state John Kerry’s efforts to broker a deal collapsed in April 2014.

France stepped in and organized an international conference in January intended to lay the groundwork for a return to Israeli-Palestinian negotiations, but there has been little headway.

“The US is committed to supporting a true peace process between Israel and the Palestinian Authority,” Haley said on Twitter.

Mansour described his meeting with Haley as “cordial” and said they agreed to continue discussions.

The US ambassador earlier this month rejected suggestions that the new administration was abandoning the two-state solution to the Israeli-Palestinian conflict.

“We absolutely support a two-state solution, but we are thinking out of the box as well,” Haley said.

The UN Security Council will discuss the Middle East peace process on March 24 and hear a first report on whether Israel is complying with a new UN resolution demanding an end to the building of settlements on occupied Palestinian land.

The resolution was adopted after the former US administration did not resort to its veto and instead abstained, allowing the measure to pass.

Haley has fiercely criticized the former administration for failing to use its veto to defend Israel and has dismissed the resolution as a “terrible mistake.