Seven weeks into Turkey’s Operation Olive Branch, a mission to clear Kurdish fighters from Syrian regions along its southern border, the Turkish military says its troops and Syrian rebel allies have nearly surrounded Afrin. They announced Tuesday that the central section of the border city and other “critically important areas” have been seized from the principally Kurdish militia known as People’s Protection Units, or YPG.

The announcement, released in a written statement Tuesday cited by Turkey’s state-run Anadolu news agency, effectively means Afrin has been placed under siege. With the local Midanki Dam now also under Turkish control, according to the U.K.-based Syrian Observatory for Human Rights, the town’s external water and power supplies have also been severed.

The moves mark a new phase in what has been a complex, politically fraught enterprise for Turkey. The country views the YPG as a terrorist organization aligned with the separatist Kurdistan Workers Party, or PKK, which has been outlawed within its own borders. Yet the U.S., a Turkish ally, has partnered with the Kurdish fighters in their own struggle against ISIS in Syria — and just a few weeks ago, as the Kurdish militia lost ground in the region, they sought help from supporters of Syria’s regime.

Turkish President Recep Tayyip Erdogan has expressed his frustrations with the response — or lack thereof — from his country’s fellow NATO members with regard to the military operation.

“We are constantly harassed by terror groups on our borders,” he said in a speech to supporters earlier this month, commenting on the U.S. decision to support and arm the YPG, according to Agence-France Presse. “Unfortunately until now, there has not been a positive word or voice.”

“Is this friendship?” he added in another speech. “Is this NATO unity?”

Erdogan has said Turkey has “neutralized” nearly 3,400 “terrorists” since the start of Operation Olive Branch on Jan. 20. As Anadolu explains, “Turkish authorities often use the word ‘neutralized’ in their statements to imply the terrorists in question either surrendered or were killed or captured.” 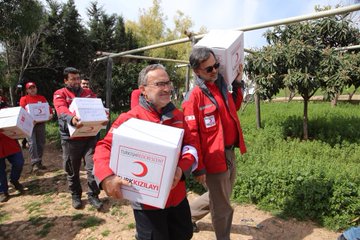 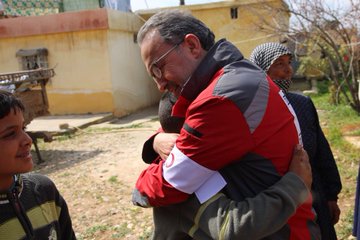 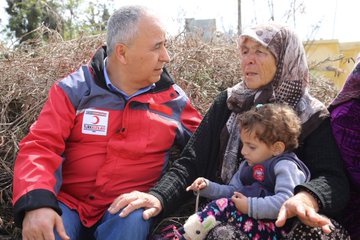 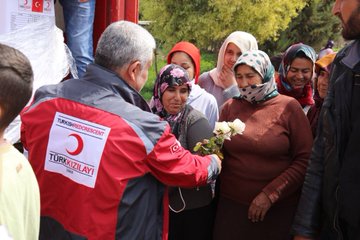 Our food aid distributions continue in Afrin, #Syria. Our teams with a high level participation of Deputy President, SG and DG of the Turkish Red Crescent conducted aid operation in #Afrin‘s Nisriyye Village.

At the same time, the Turkish military has said it is only targeting military installations, pairing its campaign with humanitarian activities to aid and protect local civilians — an assertion contradicted by other observers on the ground.

“We continue to receive disturbing reports out of Afrin of civilian deaths and injuries, and restrictions on civilian movement as a result of ongoing military operations,” Panos Moumtzis, the United Nations’ regional humanitarian coordinator for the Syria crisis, said in a statement earlier this month.

“Those who risk moving continue to be stopped at exit points by local authorities in Afrin, preventing them from accessing safer areas. To date, an estimated 5,000 people have reached surrounding villages and Aleppo city, while tens of thousands more are now believed to be displaced within Afrin.”

Local residents also told The Associated Press of soldiers opening fire on some civilians as they attempted to leave the area, including one 32-year-old man.

“I spend most of the time standing up, I swear to God, like a madman. Every time I sit down for two minutes, I get up again and start pacing to ease the tension,” he said to the AP in a text message. “Every time I think they are closer, and I think of my wife and kids and parents. I am afraid and I feel like there is a volcano in my belly.”

The Syrian Observatory for Human Rights estimates that in recent weeks some 16,000 civilians have fled the area for nearby towns, where they now “live in tragic humanitarian conditions” in displaced-person camps.