The Shanghai Composite Index fell 6 percent on July 3, rounding out a 28 percent decline since June 12, when the country’s stock markets peaked. The deterioration occurred despite intensive government efforts to stabilize prices and revive investor sentiment. Overt attempts by Beijing included cutting benchmark interest rates and reserve requirement ratios and loosening restrictions on investor access to margin loans, in addition to less overt moves, such as direct interventions to prop up the market with government-backed purchases of blue chip stocks. On Friday, in a clear bid to win investor confidence in its oversight abilities, the securities regulator announced it would investigate signs of potential market manipulation. Yet so far, Beijing’s efforts have failed to achieve the desired effect of stimulating, or at least stabilizing, China’s leading stock markets.

In the days and weeks ahead, Beijing will not meekly accept the natural winding down of the past year’s stock boom turned bubble. Rather, it will continue to work, both overtly and covertly, to prevent prices from collapsing outright — all while seeking to reshape investor sentiment and expectations through investigations, like those recently announced. The question of why Beijing feels compelled to take action remains, especially when any intervention risks exacerbating whatever financial and political fallout may come from an eventual market decline or crash. The answer to this question lies in understanding the role of stock markets in China’s economy and Beijing’s broader policy priorities, as well as evaluating the potential effects of a stock market crash on both.

The Chinese government’s core policy goal — the crux of its entire economic reform and rebalancing program — is to cultivate a domestic consumer base capable of supporting nationwide growth that is stable, sustainable and less exposed to fluctuations in external demand. To do this requires a boost in average incomes to a level where non-essential purchases become feasible for ordinary people. Additionally, China needs to instill in its citizens a sense of financial security adequate enough to convince them to spend — rather than save — their disposable income.

China has struggled on both fronts over the past two decades. Until recently, China was a country of near-universal poverty. Its post-1978 economic growth model, grounded as it was in low-cost exports and state-led investment into infrastructure construction, necessitated two policies: the systematic repression of manufacturing wages to maintain the competitiveness of exports and the suppression of interest rates on savings deposits. Keeping interest rates low ensured cheap financing for China’s state-owned sector, which was responsible for the vast majority of infrastructure development and which survived on credit from state-controlled banks. These factors, more than any supposed cultural inclination to save, explain China’s extraordinarily low levels of private household consumption relative to other parts of its economy — and compared to consumption levels in other countries.

For China’s leaders, a key question over the past two decades has been how to cultivate greater household consumption without undermining the low-cost export and government investment-led economic growth model. Doing so required creating investment avenues by which ordinary Chinese citizens could achieve returns on their savings that outpaced inflation, but which did not direct those savings away from domestic export and construction industries. Allowing ordinary Chinese to invest their savings overseas was clearly not an option — not only would it direct those savings away from the domestic economy, but the free flow of capital in and out of China would constrain the government’s ability to manage the yuan’s value. Bearing this in mind, China’s leaders in the early 1990s settled on two approaches: commercial real estate markets and stock markets. Both would give ordinary Chinese new opportunities to invest their savings and reap the rewards while simultaneously directing those savings into key industries and sectors, including housing and infrastructure construction and the state-owned sector, which enjoys disproportionately higher representation on China’s largest stock exchange.

For most of the past 20 years, commercial real estate was by far the dominant avenue for ordinary Chinese to invest their savings, with stock markets playing a minor and unsteady second fiddle. Real estate and related industries formed the single largest component of China’s economy. As long as home sales and prices rose, as they did with extraordinary consistency for two decades, real estate provided an unrivaled investment opportunity, one firmly backed by the Chinese government. This was especially true after the 2008-2009 global financial crisis decimated China’s low-cost export sector, amplifying the importance of construction-related industries for employment and social and political stability. In comparison, China’s stock markets, bedeviled by opacity and poor regulations, floundered. By 2009, most ordinary Chinese viewed investing in stocks as akin to playing the lottery.

To the extent that real estate was the primary means for ordinary citizens to increase their wealth, it also became critical to Beijing’s efforts to stimulate domestic consumption. This in part explains the government’s hesitancy to implement the kinds of policies that in the long run would contribute to cultivating domestic consumption. In the near term, however, bringing in policies such as deposit rate liberalization would raise costs for the state-owned companies largely responsible for real estate-related construction.

Yet now, after peaking, China’s housing has entered a period of protracted decline. With real estate-related investments no longer promising the returns they once did, and with China’s economy slowing, Beijing must find new tools for supporting domestic consumption. This is especially critical given that China is no longer able to rely on low-cost exports or the housing sector. Beijing must now look to private household consumption and consumption-driven industries as the primary drivers of national economic growth. 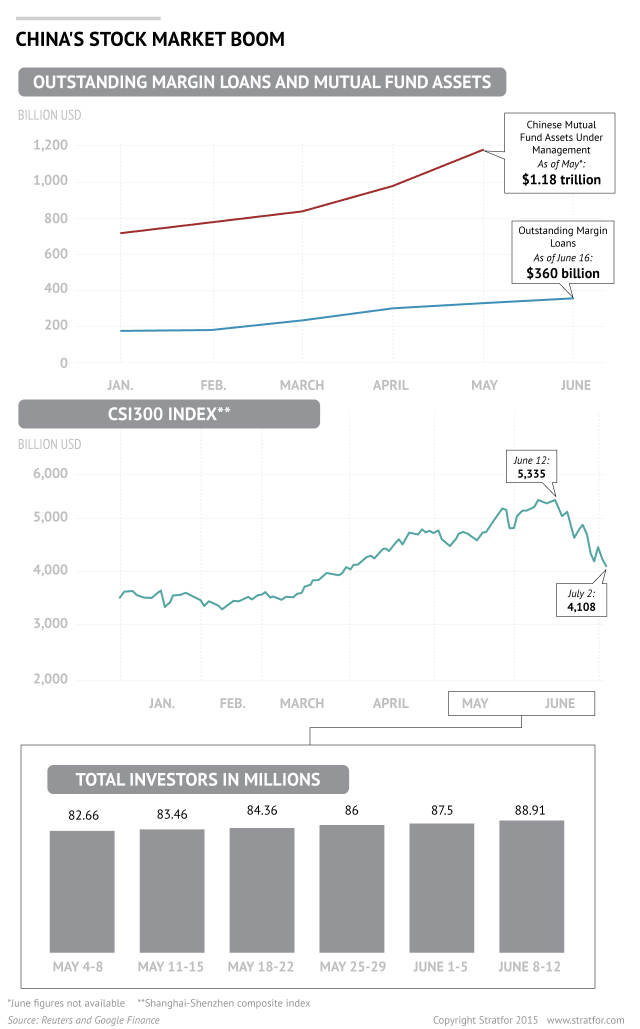 This is the backdrop against which the sharp, government-supported surge in China’s stock markets over the past 12 months should be understood. It also helps explain why the government continues to support the stock market even as it becomes clear that the market is a bubble, and even as investor leverage rises, alongside the financial risks of a market collapse. In short, a collapse in the stock market, in a climate of stagnant-to-negative growth in real estate, would almost certainly lead to a drop in household consumption and thus in consumption-driven industries. This is exacerbated by an environment that lacks substantial alternative investment avenues, in a period of slowing economic growth, slowing wage increases and rising unemployment.

Private consumption is increasingly critical, not only to Beijing’s long-term reform goals but also to maintaining economic growth, employment, and social and political stability in the near term. Beijing seeks to avoid, as long as it must, any actions that infringe on private consumption. If stock markets collapsed tomorrow, the most immediate effect — beyond widespread but containable ire over lost savings and a significant hit on business cash flows — would be a surge in state-backed bank deposits as ordinary investors move their capital to the only place offering safe, if modest, returns.

This is not necessarily a bad thing for Beijing. After all, China’s state-controlled banking sector would be flush with capital and in a stronger position to pump credit into the economy as needed. At the same time, it would likely cut against the underlying thrust of China’s reform and rebalancing program — specifically, the need to curb wasteful state-led investment, reduce the state-sector’s reliance on artificially cheap financing and improve the ability of banks to price risk. All of this could ultimately combat the widespread capital misallocation that has characterized every prior instance of massive state-backed credit expansion in China. Over the past year, banks have become an increasingly important source of corporate financing. Amid a collapse in the stock market, a rapid surge of deposits into banks would force Beijing to turn once again to the financial sector to support the economy. In all likelihood, this would lead to a repeat of the same speculative bubbles that attended the post-2008 stimulus drive.

Alternatively, Beijing could try to compel banks to hang onto the surge in savings rather than expanding lending. This would realistically be done by raising deposit interest rates. Such a move would almost certainly trigger an economy-wide crisis as the state-owned sector, already suffering falling profits and hefty debt repayment costs, collapses. It would also be an enormous boon to ordinary Chinese citizens, who continue to park the vast majority of their funds in savings deposits. By forcing a broad restructuring of Chinese industry, this would substantially accelerate the central government’s long-term reform plans. It remains doubtful that the Communist Party government could survive such a crisis intact. At any rate, it is highly improbable that Beijing would raise interest rates, a policy that stands a strong chance of undermining state security in the immediate term.

A Choice of Evils

This is the basic conundrum China’s leaders face in determining whether and for how long to sustain the current stock market boom. Barring a radical lifting of restrictions on overseas investment or a sharp increase in deposit rates, China effectively lacks channels for ordinary citizens to generate wealth beyond investment in real estate and stocks. Real estate is slowing, weighed down by years of accumulated oversupply. It no longer promises the returns it once did. If stocks decline, it is unclear what else ordinary people can rely upon to generate returns. The impact of a stock market decline on private consumption growth would only compound its effects on corporate balance sheets and investment, and thus on employment and economic growth.

The bottom line is that Beijing has an underlying interest in ensuring that China’s stock markets do not collapse. Therefore, the government will likely continue to intervene to the best of its ability, propping up markets and market sentiment whenever the risk of a major sell-off becomes too great. This does not mean that stock prices won’t slide further, or that the market will stabilize — indeed, it could well become even more volatile over the coming months. But it does reinforce the fact that until Beijing invents more avenues for investment, or unless it embraces interest rate hikes and any post-crisis restructuring, it will have to rely on the few tools available to ensure that citizens can generate the wealth and financial security they need to consume. Beijing’s reform goals, as well as the ability to manage China’s slowdown, depend on this.

The Lies that Bind: When Science Fiction becomes Historical Fact, and Drowning becomes the Kiss of Life!

By Emad El-Din Aysha, PhD   Was watching an annoying science fiction movie the other …